August 2, 2011 (Alpine) -- "Oh, you're beautiful!" San Diego East County Chamber of Commerce President Scott Alevy exclaimed as his wife, Joanne, dished up a forkful of chicken.  But he wasn't complimenting her cooking. Instead, Alevy was admiring Raja--a 500-pound Bengal tiger that Joanne was feeding after winning a drawing at Lions, Tigers & Bears (LTB) in Alpine.

The Chamber hosted a fundraiser to benefit the big cat rescue facility last weekend, donating 100% of proceeds to help this worthy cause while providing a memorable experience for Chamber members. View our video: http://www.youtube.com/watch?v=hFhE9h-O0Uw 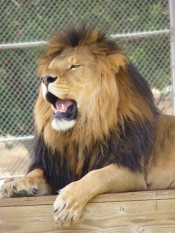 LTB founder Bobbi Brink wasn't there, however---since she was en route to Oklahoma to rescue Delilah and Blossom, two black bears at a zoo that closed.

"They told her that if she wasn't there by tomorrow, they were going to sell them to a game park," an employee at LTB said.  You can join the "Bears Best Friend Forever" campaign by donating to support the transportation and housing for these animals; cll 619-881-2053 for details.

The new bears will join Liberty, a two-year-old black bear brought here last July after it began foraging in campsites in Riverside County.  A spacious new enclosure large enough for five bears will be finished just in time for the new arrivals, who will be in quarantine for several weeks before joining Liberty in their new home. 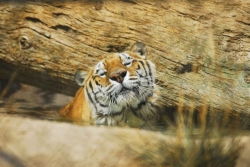 The park is one of only 12 no-breed, no-kill rescue facilities in the United States for big cats and now, bears.  You can also see African lions as well as a leopard, bobcat, mountain lion and other fabulous felines--not to mention a precocious domestic cat that seemed to delight in boldly prancing in front of the bigger cats' cages. 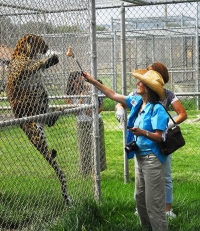 ECM editor Miriam Raftery bought drawing tickets and was also among a winner, choosing to feed a leopard capably of leaping and climbing up the fence.  It was quite an experience to be just inches from this magnificent creature!  (The leopard, born in captivity, was rescued from an owner who was illegally breeding the animals.)

If you haven't been to LTB in a while, you'll be surprised at all the changes.  Recent additions include a petting zoo completing with animals all named for famous people such as Johnny Cash and 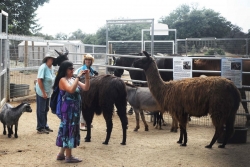 Lucille Ball.  Llamas, a pot-bellied pig, goats, sheep, donkeys and horses are among the cuddly critters delighting children and their parents.

A resident macaw greets visitors, while peacocks strolll the 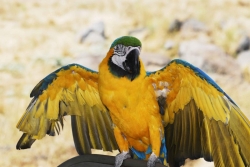 grounds.  There are also chickens and  herd of wild turkeys. "They eat rattlesnakes," a volunteer said of the turkeys.

Another new addition is a gift shop, where you can buy 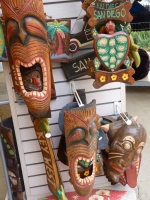 At this event, kids also got into the "wild" spirit of things with facepainting, then cooled off with free snowcones. 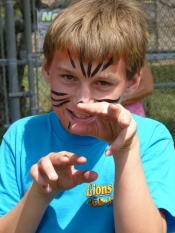 Non-members and members are also invited to various special events, such as Wild Night in the Country--a campover with the big cats on September 23 and 24. 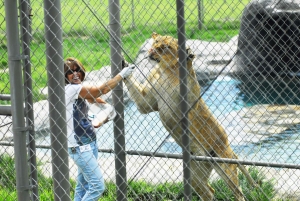 Then on October 1, you can savor a Wine Tasting Dinner at LTB, wining and dining under the stars with Bakari, the lion, and other big cats. 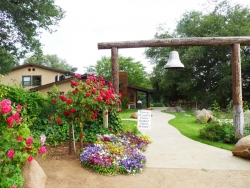 There's even a bed and breakfast inn on the premises, for those who want a safari-like experience without the need for roughing it. 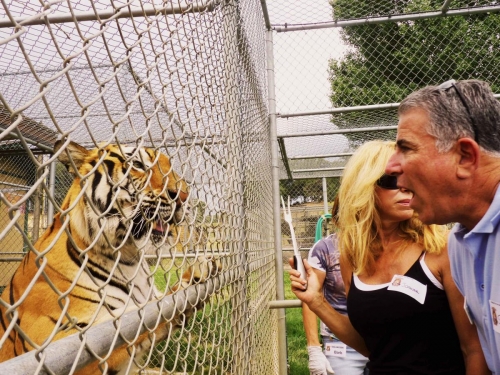