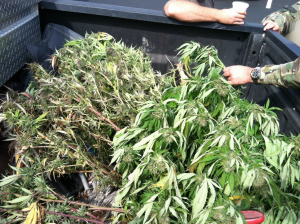 December 9, 2014 (Spring Valley) – An armed robbery at an unlicensed marijuana dispensary in Spring Valley turned violent, resulting in gunshot wounds to an alleged robber and an employee of a nearby store who tried to assist the robbery victims.

Sheriff’s deputies responded at 11 a.m. to a report of shots fired during the robbery at Spring Valley Greens in the 9000 block of Campo Road.  According to Lieutenant Chris May, the marijuana distribution storefront is operating illegally without a license.

Deputies located two men driving away from the scene.  They were uncooperative at the time of detention, so the deputy used a K-9 police dog to apprehend the driver. The passenger fled on foot and was later found with multiple gunshot wounds sustained during the armed confrontation with the victim, Lt. May said.

Crutcher’s companion, 30-year-old Frank Daley, drove Crutcher away from the scene and was subsequently contacted by deputies in the 4100 block of Camino Paz. Crutcher and Daley were both transported to local hospitals for evalution and treatment of their injuries from the incident.

Sheriff’s licensing is investigating the Spring Valley Greens business to serve the owner with a Cease and Desist order and the Narcotics Task Force, which is conducting a follow-up investigation into marijuana trafficking.

If you have information related to these crimes you can contact the Sheriff’s department at 858-565-5200 or to remain anonymous, you can call Crime Stoppers at 888-580-8477 or visit www.SDCRimestoppers.org .