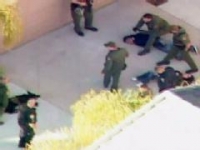 April 4, 2011 (Otay Mesa)—Schools near the Otay Ranch Town Center were placed in lockdown briefly following a shooting at the mall. According to multiple sources, three people smashed a window at the Apple Store shortly before 6:45 a.m.

Chula Vista Police report that 40 rounds were fired in a shootout between a security guard and the suspects.

A male suspect was found dead nearby in a silver Acura, killed by a bullet that went through the passenger window and struck him in the head, 10 News reports. Two other suspects, a man and a woman, were taken into custody at an apartment complex near Dawn Crest Lane and Birch Road.

The eastern end of the mall is closed while the investigation continues, the Union-Tribune reports.