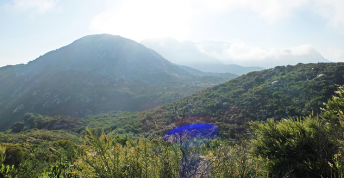 Update: The victim has been identified as 22-year-old Nathaniel Takatsuno, who had reportedly been free climbing without a rope when he fell 200 feet, Times of San Diego reports.

December 5, 2022 (Lakeside) – The body of a rock climber who fell to his death yesterday on El Cajon Mountain, located in the El Capitan County Preserve in Lakeside was recovered today by a Sheriff’s helicopter crew.

The Sheriff’s department indicated the climber, a man whose identity has not yet been released, fell about 200 feet.

A video posted on Facebook by Lakeside resident Billy Ortiz shows the difficulty of the recovery process and indicates the fall occurred on the south side of El Cajon Mountain, which is also known as El Capitan.

It is unclear whether the climber was using ropes or free climbing when the tragic accident occurred, or whether loose rocks may have given way, or a medical emergency could have precipitated the plummet.

An investigation is underway to determine the cause of the fall.

The victim’s identity will be disclosed by the San Diego County Medical Examiner after notification of family.