Feb. 12, 2011 (11 p.m.) - The San Diego Medical Examiner has identified the victim in this accident as Matthew David Pack, 24, of San Juan Capistrano.  Cause of death has not yet been determined. 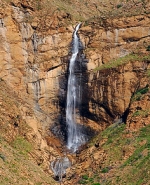 Update Feb. 12, 2011 9:30 a.m. - The rock climber has been confirmed as a fatality, San Diego Sheriff Lt.. David Brown said.  "He was dangling halfway down the rock face, in the water underneath the waterfall," he confirmed.  The body recovery effort continues in the rugged canyon area.  No additional details on the identity or description of the man have been released at this time.

February 11, 2011 (San Diego’s East County) – Efforts to recover the body of a climber presumed dead at Mildred Falls have been called off for the night, San Diego Sheriff's Lt. Jim Duffy informed ECM moments ago.

The rock climber is believed to have died while awaiting a rescue helicopter this evening, East County Magazine has learned.  Officials believe that the victim, a male, "was trying to rappel into the waterfall when he became entangled in ropes and was drawn into the water," Duffy said, adding that three different people reporting hearing the individual calling for help.

Incident Page Network reported at 6:05 p.m. that San Diego Sheriff’s Copter 1 was en route for a technical rescue of the hiker, who was unconscious hiker halfway down the falls, possibly a rock climber who had been rapelling. Lt. Duffy said rescuers initially responded to a man yelling for help at mile marker 9 on Eagle Peak near Mildred Falls in the Julian area at 5:17 p.m.

According to Lt. Duffy, ASTREA 3 was in the area at 5:28 p.m. and advised that the subject in need of rescue was semi-conscious. “ASTREA 3 doesn’t have lift capability,” said Duffy, who said ASTREA requested help from Copter 1, but that Copter 1 was not able to perform the rescue. He did not know the reason, but said that Copter 1 is a large HUEY helicopter.

“Search and Rescue has been called,” said Duffy, “but it appears that the person is deceased. “ He added that lifeguards have also become involved at 6:35 p.m. , suggesting that at least one of the individuals is in the water. “ At 6:55 p.m., ASTREA was grounded and is currently awaiting the Sheriff’s Search and Rescue helicopter, Duffy stated.

Several deaths have occurred at area waterfalls in the past from diving accidents. It is unclear whether the person who expired this evening had an accident or suffered some other medical emergency.

Outdoor websites for hikers and climbers list varying heights for Mildred Falls.  Some indicate the total drop is over 300 feet high, with two sections for climbers to tackle, one apprxoimately 100 feet, another 250 feet.

This YouTube video shows the falls and remote terrain:

Matt and I met when we where just kids when I moved onto the West Side of Charleston WV. We grew up together playing soccer and basketball outside of his house. We lost touch but reconnected after I came back from college out of state. Matt was one of the best friends that I ever had. He had a kind and gentle soul. Matt and I were avid outdoors men, we would ride bikes together at Kanawha State Forest frequently, I know he was doing what he loved when the accident happened. I cant stand it that Matt is gone but I know everyone will always remember that blond curly headed guy that always looked on the bright side of things and brought joy to so many people.
Joel Becher

I am a next door neighbor of Matt's father and step mother in Charleston, WV. Matt grew up here and graduated from George Washington HS. He was a wonderful young man, adventurous and athletic. He was liked by everyone who knew him because of his upbeat, magnetic personality. He always took the time to wave or say hello. He was an avid outdoorsman. Most importantly he was a kind, gentle and loving person; a good son to his parents and a great brother to his siblings. He was truly unique and will be terribly missed by all that knew him. As you can imagine, his family is absolutely devastated by this tragedy. May God hold you in his hands Matt and comfort your family with his eternal grace

Rich:
After reading my owns comments last night I realized that I had mistakenly written that Matt was a graduate of George Washington HS in Charleston. Matt actually graduated from Charleston Catholic HS. I must have been thinking about my oldest son. Would you please make that correction for me. Thank you. Sorry for any inconvenience.

Thank you for posting. My sympathies to you and the family over this tragic loss.

If your or the family has a photo they would like to share, and/or any biographical information about Matt, we would be glad to run it.  Do you know if he ever lived in San Diego or had other local ties in our area?