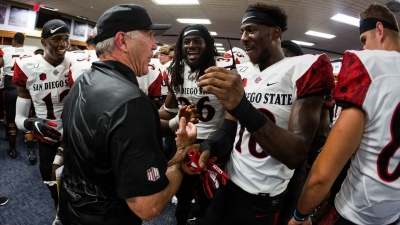 Long, who guided the Aztecs to an 81-38 record (.681) in nine seasons, led San Diego State to three Mountain West titles and a bowl appearance in all nine years on The Mesa.

Long, who spent two seasons as the defensive coordinator with the Aztecs from 2009-10 prior to being named head coach, was one of just four active coaches to lead their current team to a bowl game in each of the last nine seasons, joining Alabama’s Nick Saban, Clemson’s Dabo Swinney and Oklahoma State’s Mike Gundy, and one of five overall to lead a team to a bowl game from 2011-19 (also James Franklin, Vanderbilt/Penn State).

This past season, the Aztecs finished 10-3, capped by a 48-11 win over Central Michigan in the New Mexico Bowl. SDSU, which lost its three games by a combined 13 points, is one of 10 schools to win at least 10 games in four of the last five seasons.

In 2012, Long garnered his second Mountain West Coach of the Year award after guiding the Aztecs to their first conference championship since 1998 and a third straight bowl appearance. Despite a modest fifth-place prediction in the MW preseason poll, Long and SDSU closed out the regular season by winning seven consecutive games, matching the program’s longest victory streak since 1980-81. During that stretch, the Aztecs ranked fifth in the nation in allowing 4.7 yards per play while limiting the opposition to 19 points or less on five occasions.

After opening the season with a 1-3 mark in 2015, SDSU ran the gamut with 10 straight wins and a spot-free 8-0 mark against MW opponents. Consequently, San Diego State earned its second Mountain West title since 2012, its first outright league championship since 1969 and the 20th conference crown in program history. The Aztecs matched a school record with their first 11-win campaign since 1969, defeating Cincinnati in the Hawai’i Bowl, 42-7, marking their sixth straight bowl game appearance.

Brady Hoke, who led the San Diego State football team to its first bowl game in 12 seasons in his first stint on The Mesa from 2009-10 and has twice been chosen as national coach of the year, has been named the program’s head coach, Aztec director of athletics John David Wicker announced Wednesday.

Hoke, who has received conference Coach of the Year accolades in three different leagues, returned to SDSU in 2019 as the defensive line coach, helping the Aztecs rank second in FBS in rush defense (75.4), third in scoring defense (12.7), and sixth in both total defense (287.8) and pass efficiency defense (110.25). Under Hoke’s watch, San Diego State had two players (senior Myles Cheatum and redshirt freshman Cameron Thomas) earn first-team all-league honors for the first time since 1974 and three overall make the all-league squad, while another (sophomore Keshawn Banks) received second-team honors.

Despite losing four seniors from the defensive line prior to his arrival and entering the season with just one player with a start at the position (Cheatum), SDSU defensive linemen combined for 37 tackles for loss and 18.5 sacks in 2019 after recording just 23.5 TFL and nine sacks in 2018.

Hoke earned his first head coaching job at his alma mater, Ball State, where he coached for six years, culminating with a 12-1 campaign in 2008 and an undefeated mark in Mid-American Conference play. That season, he led the Cardinals to their first-ever Associated Press top 25 ranking and he was named the 2008 MAC Coach of the Year.

As a student-athlete, Hoke was a defensive standout for Ball State, lettering four times from 1977-80 and serving as team captain his senior season. As a sophomore, he ranked third on the team in tackles and helped the Cardinals to the 1978 MAC championship with an 8-0 record, the only other time Ball State finished a league campaign undefeated prior to 2008. He posted 95 tackles as a junior and a team-high 150 stops as a senior en route to earning second-team all-MAC honors. Hoke earned his bachelor’s degree in criminal justice at Ball State in 1982.