By Jeremy Los and Miriam Raftery

“Californians can no longer afford to build roads and infrastructure with golden shovels. We need to send the money where the rubber meets the road. Literally.” –  Senator Joel Anderson

“Eliminating Caltrans would result in an ineffective and scattered patchwork of local projects, hamper the movement of goods and people, and ultimately hurt our economic competitiveness… During the 2007 wildfires, we partnered with first responders and helped with emergency road repairs and evacuations.” --Matt Rocco, Caltrans 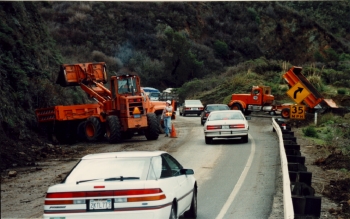 Can local communities afford those cost?  How will motorists and taxpayers be impacted?

Supporters say the bill would save money and cut waste.  Opponents question whether public safety could be jeopardized, particularly in San Diego--where a Grand Jury investigation found roadway conditions "appalling" and where local agencies have relied on Caltrans for quick highway repairs during major wildfires and other disasters.

The bill, which is supported by 12 other legislators, provides a way to cut the budgetary gap in California, according to Anderson. Under the proposed measure, all federal and state highway funding would go directly to counties, cities, and the corresponding local transportation agencies. The cities and counties could then take that money to partner with a private construction firm.

“Caltrans annual budget of $12.8 billion is double of what it was a decade ago, but new highway construction has virtually flat-lined during the same period,” said Anderson in an op-ed piece in the Union-Tribune.

Anderson claims that if Caltrans was to be eliminated the state could save billions by eliminating “wasteful spending” and permanently cutting 20,000 state personnel positions where the average employee receives “more than $100,000 in pay and benefits each year.”

The state’s auditor found that 62 percent of Caltrans projects that completed construction in fiscal years 2007-08 through 2009-10 had support costs that exceeded their respective budgets. These overruns totaled more than $305 million, an auditor’s report concluded.

“Californians can no longer afford to build roads and infrastructure with golden shovels,’” said Anderson. “We need to send the money where the rubber meets the road. Literally.”

But if California eliminated Caltrans, then federal funding which accounts for 35 percent of highway transportation funding, could be lost. Those funds are allocated to states via the Federal Highway Administration-- which only appropriates the funds to states.

“Eliminating Caltrans would result in an ineffective and scattered patchwork of local projects, hamper the movement of goods and people, and ultimately hurt our economic competitiveness,” argues Matt Rocco, Public Affairs Chief for the Department of Transportation.

The burden of maintaining freeways and back roads will fall on the local governments if the bill was to be passed. In areas like Alpine, Julian, Jamul, and Portrero this upkeep could be difficult as back roads and mountainous terrain are in abundance—and prone to wildfires.

“During the 2007 wildfires, we partnered with first responders and helped with emergency road repairs and evacuations,” says Rocco. “The work that Caltrans does and the expertise our employees possess would be very difficult to match if delegated to each county.”

The failures of Caltrans litter the state, according to Anderson. He cites $3.2 billion dollars spent on the renovation of the Bay Bridge as an example and says the MacArthur Maze “connector collapse” also exemplies the fledging work and wasteful spending of Caltrans. According to Anderson, “Caltrans needed months and $10 million to fix the collapse, yet the C.C. Myers Company completed the work in 26 days for $2 million less.”

In a report done by California’s independent State Auditor on April 28, 2011, Caltrans was found to have exceeded its budget on 62 percent of the projects completed in the fiscal years of 2007-08 through 2009-10. According to the report, the excess spending totaled more than $305 million.

The auditor also found that the annual salaries of certain Caltrans employees, including engineers, increased by more than 40 percent.

Rocco noted however that Caltrans employees work around the clock to ensure that mobility of motorists is not impeded throughout the state. According to Rocco, in San Diego over just the last year, Caltrans repaired more than 27,000 feet of guardrail, removed over 6,000 cubic yards of litter, cleaned nearly 1,100 drains and responded to more than 500 incidents requiring emergency traffic control.

The jobs are also dangerous; in recent weeks three Caltrans employees have been klled on duty by motorists, including two in San Diego County.

So who profits from eliminating Cal-Trans? Potentially, private contractors who stand to land lucrative contracts from local governments that opt to outsource road construction and maintenance responsibilities.

Moreover, cash-strapped cities have been known to cut corners on road maintenance such as pot hole repairs, casting doubt on whether highway maintenance would be given adequate priority to protect public safety if the state’s transportation agency was eliminated.

In 2007, a San Diego Grand Jury investigated the City of San Diego’s repair and maintenance of 2800 miles of City streets. That report found that in 2007, only 37 percent of the City’s streets were in acceptable condition—down from 49 percent in 2001. “Lack of funding for repair and maintenance of streets for several years has resulted in a deplorable situation. The taxpayers will now be called upon to foot the bill for the big expenses of repairing streets which, if properly maintained, would not have the extensive damage and associated major increase in cost for repair.”

The Grand Jury’s scathing report further observed that “If the City continues down the current road, soon there will be no roads to continue down.”

Whether eliminating Caltrans would ultimately save taxpayers money or cause a new set of problems for local taxpayers remains in question.

So does the issue of whether some reasonable cuts to Caltrans’ budget could be accomplished, along with improving areas of concern, without transferring highway construction and maintenance responsibilities onto cities, counties and private contractors.

Of greatest concern for East County residents, however, is the question of how cash-strapped cities and the County of San Diego would be able to fund highway maintenance and construction if Caltrans was eliminated—and whether or not adequately trained emergency staffing would be available for critical repairs during a wildfire, earthquake or other emergency.