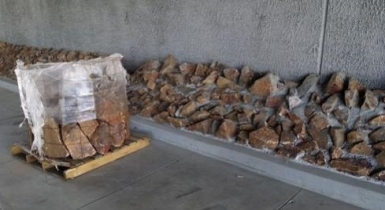 April 27, 2016 (San Diego) — Mayor Kevin Faulconer is being rocked by criticism after a homeless advocacy group posted photos on Facebook of sharp, jagged rocks installed by the city of San Diego beneath an overpass where homeless people had been sleeping and taking shelter during storms. San Diego has no year-round homeless shelter and has also been conducting sweeps to confiscate belongings of homeless individuals.

“Let your voices be heard and contact the Mayor to let him know that the current criminalization and anti-homeless policies that are being deployed are the wrong way,” Homelessness News San Diego wrote, also posting the Mayor’s phone number (619-236-6330) and e-mail (kevinfaulconer@sandiego.gov )

Kevin Inman posted that he lives a block from the site. “We have had the police and paramedics out numerous times because of the camps. There are no easy solutions –as a community we need to invest tens of millions of dollars to offer support services, but where is the political will? Instead there is talk of spending $1 billion on a football stadium right in this exact spot.”

Many voiced outrage at the action.

Lori Saldaña, who is running for mayor against Faulconer, has blasted Faulconer for taking punitive action against the homeless instead of offering solutions to homelessness.  She posted a video online showing a homeless encampment under the bridge on Imperial Ave. under I-5 taken during a storm shortly before the rocks were installed.

Jeeni Criscenzo of Amikas, an advocate for the homeless, delivered a shopping cart filled with faux-rocks to the Mayor’s office in protest of the decision. “Tell the mayor we want real shelter and housing solutions, not sweeps and rockbeds,” she posted on Facebook.  Criscenzo has launched a petition that’s received some 9,000 signatures asking the Mayor to allow construction of small houses on vacant lots to provide a clean, safe place for homeless people to live. A petition, but thus far Faulconer has not responded.

“There is a special place in hell for politicians who do stuff like this,” Kathleen Connell wrote.

Ryan Burns asked, “So why have the law that says they [homeless] have the right to sleep on sidewalks from 10p.m. to 7 a.m.?”

Patrick Moore observed, “Maybe if we had adequate public shelters this wouldn’t be necessary?!”

Michael McConnell, whose post for Homelessness News San Diego alerted the public to the issue, calls the rocks “dangerous” and says the city has created a “garbage trap” while failing to offer any meaningful solutions to the homeless situation in San Diego, where housing prices have soared even as the homeless population has climbed to the fourth highest in the nation, as the Los Angeles Times recently reported.

Well, our country is too busy putting dead beats and undocumented "residents" on welfare so they can vote democrat. There is no time or money left for the homeless. Our County has no spare money as they have too many worthless employees. Their latest trick is to send out DPLU inspectors in the real rural East County and writing properties up for erosion control to keep runoff out of the storm drains and out of the waterways. Memo to the County. 1) there are NO storm drains anywhere near East Campo. 2) The nearest waterway is Lake Morena. It's 10 miles away and up hill!

This is just heartbreaking. And thoughtless. Whomever proposed this idea to the City should be ashamed of themselves, as well as the Mayor for approving it. Our homeless are human beings, not to be treated like pigeons who land on billboards or rooftops to be shooed away by pointies. I would absolutely love to see how much money it cost to acquire the materials, pay the laborers to install the rocks, and maintain the trash removal that will now be necessary. Compare that to efforts to assist the homeless. Disgusting.
La Mesa too. Sharp rocks placed in median on La Mesa Blvd. I expect to discourage people from standing and asking for money.
When you discover that nearly half the homeless - if not more - are VETERANS, you'll realize that this policy of sharp rocks positioned right where a war hero might want to lie down to rest is inhumane. We're talking about veterans of Iraq, Korea, Viet Nam, and even Korea. Allowing our Mayor to carry out such a policy means that we citizens are culpable, too. Not all homeless are veterans. But they are ALL humans. How can we sit by and allow them to be treated like GARBAGE? Have we gone past the point of No Return where it's okay to treat our fellow human beings in such a despicable way? Maybe the underpasses were not a good solution. But without a BETTER solution, why on Earth would you create a torture scenario? We are punishing people with mental and physical disorders for their homelessness. Where are the homeless supposed to go???? I understand that cities like NYC and Austin, Texas, give their homeless one-way tickets to San Diego. Those cities, too, need to step up and help us create a viable solution to this problem. Because, as we can all see, the problem is not going away even when we try to ignore it. These rocks? Shameful!