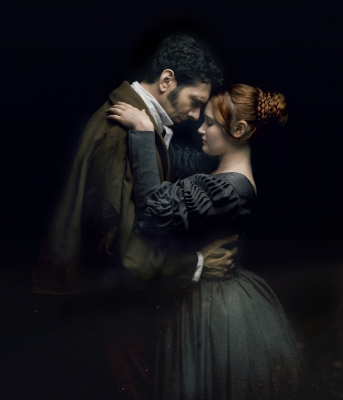 September 15, 2019 (Escondido) - The 413 Project and The Grand Tea Room in Escondido present the classic Gothic romance Jane Eyre, based on the book Charlotte Bronte. You might wonder how could they create the appropriate mood in a tea room. Computer programming is the answer: technology created the mysterious, eerie air surrounding the romance. 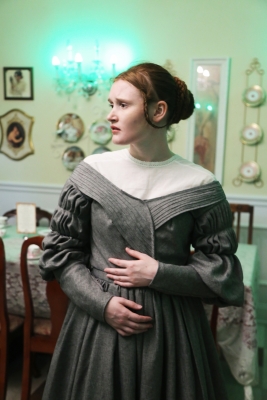 Jane Eyre was a survivor. She rose above the adversity of her early life to find true love with a dark, brooding man, who many find romantic. Jane, unused to kindness, found his companionship compelling.

The play is set in the middle of The Grand Tea Room surrounded by the elegantly set table and viewers. against the backdrop of an old fashioned fireplace. The props are simple; the costumes, which were designed in house, are fashionably all in style.

Jane Eyre comes to the foggy moors of Thornfield as governess for Adele, Rochester's ward. Her first meeting with Rochester takes place when she is out walking and he falls from his horse. Rochester is taken by her immediately--not that his manner would indicate such.

Jane Eyre is played by Hunter Thiers. The recent graduate from NYU has been acting since she was nine. Her favorite book is Jane Eyre. She brought her talent to the 413 Project as the heroine. Eyre was very much a woman of today in her views, believing in social equality for woman and the poor. Thiers contrasted nicely into the Gothic realm of Edward Rochester, played by Robin Thompson, who knows how to handle dark and moody. The main focus is among the two characters, but the accompanying cast members each shine in their own roles including Lavender Forrester who plays young Jane and Adele, two roles for the young actress, adding to her resume as she uses a French accent. 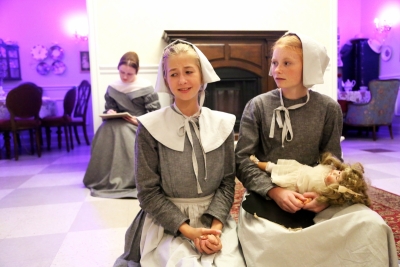 It's not often we have the opportunity to enjoy plays of this type. Nestled in the tea shop, the actors create their own unique experience. The audience is also treated to an English-style high tea of little sandwiches, an apple strawberry salad, a fruit kabob and a fruit bowl plus champagne and two kinds of tea. At intermission, we have scones complete with lemon curd, cream, jelly, a Jane Eyre sugar  cookie, brownie and macaron. Yes you can get a box for leftovers.

The Tea shop offers a gift shop with all things tea and other cute items for those who can't resist temptation. Come for tea anytime or join them for a special event including Jane Eyre. www.thegrandteashop.com.

The 413 Project started just six years ago as a nonprofit and has evolved into a large theatrical company with two southern California locations in the San Diego and Los Angeles areas. They usually perform these plays at tea shops, an accomplishment of it's own. They have become known for their literary nature and high artistic quality.

If you love tea, theatre, or the adventure of trying new things, put The Grand Tea Room, The 413 Project and Jane Eyre on your treat yourself to do list.

Jane Eyre runs September 5-28, 2019 at the Grand Tea Room on West Grand Avenue in Escondido. To buy tickets--and they do sell out because the space is limited--visit www.the413project.org.