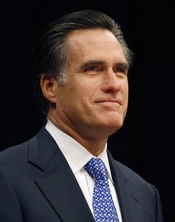 Former Pennsylvania Senator Rick Santorum, a favorite among Evangelical voters, made a last-minute rise in polls and took 24.5% of the vote.  Conservative Texas Congressman Ron Paul, who formerly ran as a Libertarian, also had a strong showing with 21.4%.

Romney, who  took fewer votes than four years ago when the field of candidates was smaller. Romney stressed that his experience in private sector gives him an edge over Santorum to “get the economy again.”  He emphasized in an ABC News interview that he has been running a national campaign and believes he is the strongest candidate to take on President Barack Obama.

Michele Bachmann announced this morning that she is withdrawing from the presidential race, after placing last among candidates who campaigned in Iowa. Bachmann got 5% of the vote, despite winning an earlier straw poll in Iowa.  Herman Cain, who suspended his campaign amid allegations of sexual assault and a long-time affair, came in last with 0% of the vote, finishing below “other” and “no preference.”

Former House Speaker Newt Gingrich placed fourth with 13.3%, after barraging the airways with negative ads on Romney and calling Romney a “liar” and criticized the Super-Pacs funding Romney and Texas Governor Rick Perry.  The embittered Gingrich also blasted Paul as “dangerous” on foreign policy.  Romney responded that he has “pretty broad shoulders” to weather attacks from competitors.

Perry took just 10% but promptly tweeted that he is gearing up for the South Carolina primary, where a Southerner may fare better than in the Midwest or the next-up New Hampshire primary.

Jon Huntsman Jr., former Utah Governor and ambassador to China, did not campaign in Iowa and took 0.6% of the vote. Huntsman has instead opted to campaign heavily in New Hampshire, hoping for a strong showing in the nation’s first primary election.  Louisiana Governor Buddy Roemer, also a former Congerssman, will also take his campaign to take money out of politics to New Hampshire.

Not surprisingly, President Barack Obama won the Democratic caucus in Iowa unanimously, as the only Democrat on the ticket.

For more information on the candidates and details on their positions, see http://www.eastcountymagazine.org/node/8288.