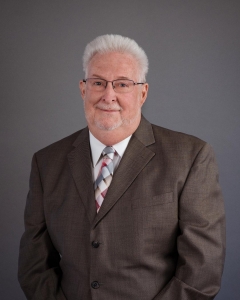 July 22, 2022 (Santee) -- Ronn Hall, a member of the Santee City Council for eight years, says he wants to keep the job and is running this November for another term.

“There are some things that we’ve been working on and I’d like to see them through. There are a lot of things (new businesses) coming here, and I’d like to make sure they still come here, something other than chicken restaurants.”

Hall, who represents District 2 and serves as vice mayor this year, says he’s got nothing against chicken shacks, but he’d much prefer a long-planned community center gets built, along with a couple of new parks, and maybe even that Karl Strauss Brewery that was promised about seven years ago.

He also wants to continue working to fix the city’s roads, and add more walking trails, particularly along the San Diego River.

Asked what he’s most proud about during his two terms on the council, Hall points to keeping the city’s basic infrastructure maintained, “so that the place doesn’t fall down.”

He cites Santee’s responsiveness to resident complaints as something he’s also proud about. “Customer service is important to me,” said the owner of his self-named insurance brokerage. “When (residents) say they have a problem we try to get it done ASAP.”

Hall, who is 65 and has been a Santee resident for 22 years, says despite what many critics say, the City Council doesn’t approve every new development that comes before it. “I’ve turned down a few, so no,” he said.

While the council does respect property rights, it also has forced developers to conform to city standards, and make upgrades when the body feels those changes are warranted, Hall said.

As for Fanita Ranch, the largest proposed development in Santee’s history, Hall now says he wants a public vote on the 3,000-home project. In September 2020, Hall and three other council members approved Fanita Ranch in a 4-1 vote, effectively preventing Santee residents from weighing in on the issue.

Opponents collected enough signatures to challenge the plan, which caused the council to schedule a vote for this November. However, in June, the council removed the issue from the ballot, stating that due to a required revision of the plan’s environmental report (mandated by a Superior Court judge), there was no real project to vote on.

Hall says developer HomeFed still has the right to build about 1,300 homes on the area in the city’s northwest quadrant through permits it obtained from the city in 2007. In addition, because of changes mandated by the state to increase affordable housing, Hall said those new home owners could build two or three ADUs (accessory dwelling units) on each parcel. “They can build thousands of units on that land and there’s not much we can do about it,” Hall said.

He called HomeFed’s 2020 plan, which included a school, a fire station, more open space, and $40 million to improve State Route 52 “the best offer from a bad situation.”

Hall recently attempted to buck a move by some of his colleagues to allow the sale of cannabis inside the city limits. He wanted nothing to do with the smoke shops despite the fact these have been operating in other county cities for years. Yet others said it was only a matter of time when a group would challenge the city’s current law prohibiting such shops, and  likely lose any type of control over the sale of cannabis, including where sales can occur and other restrictions.

“I’m still against it, but I can count,” said Hall, who wants to impose the highest possible tax on the drug. The council is scheduled to vote on an ordinance regulating cannabis sales in August.

On the increasing number of homeless in Santee, Hall says the city is contributing some $900,000 to various social agencies to house people, and signed a memorandum with other East County cities to cooperate on finding viable solutions. “The biggest problem is the state law (covering how governments can respond) that says unless you have a place to put them, you can only tell them to leave,” he said.

On Santee’s past reputation as a hotbed for white supremacists, Hall says it’s undeserved. “If you look at the latest statistics, we’re getting more diverse….Some coastal cities are less diverse than we are.”

When it comes to being connected politically, few in East County can match Hall and his wife, Virginia, who has been the president of the board of directors for the Grossmont Healthcare District since 2016. They often attend each other’s meetings, and count six children in their blended family (two boys from his earlier marriage, and four boys from hers). They have three grandchildren, including one that’s living with them part time. “We’re busy,” he says about their dual public careers.

He’s also pro-business, and wants to keep Santee’s dream of creating an arts and entertainment district at the forefront. Hall said the city already has a great reputation as a shopping destination, as well as attracting many visitors to its vaunted Santee Lakes, and Sportsplex fields. Add to that is the city’s bigger public events such as its annual street fair, Fourth of July fireworks, and the many summer concerts it puts on.

Santee has many of the pieces in place now, and just needs to work on creating a few more, Hall says.

While Santee adopted a term limits law in 2020, those limits of three council terms and two mayoral terms apply starting this election cycle. That effectively means, Hall could possibly serve for another 20 years.

“If you think that’s happening, you’re crazy,” he says about that possibility.

As of July 21, Hall faces no current opposition in his quest for a third term. Candidates have until Aug.12 to file to run for the position.

East County Magazine will cover all the candidates for District 2 and for District 1, where incumbent Councilman Rob McNelis has yet to declare his intentions.

you say "I’m pro-police, I’m pro-fire (department).” He’s also pro-business,".. what about the people you represent???? oh wait retrumplicans could give a crap about the people!!! are you a criminal like issa??? "He also wants to continue working to fix the city’s roads." lets list the streets that are like cobblestone in your district....jeremy north of mast, braverman on the north or west bound side, most of hillcreek, follett, just to name a few. so are you a liar or just all talk???