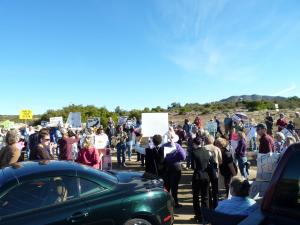 Maximum occupancy of 2,600 people is twice the population of Boulevard

Hearing May 8 at Boulevard Planning Group; Comments on proposal accepted through May 12

April 11, 2014 (Boulevard) – Properties controlled by the Hamann Companies entities and family are proposed for a variety of large-scale projects on McCain Valley Road in Boulevard, gateway to the McCain Valley, a federal recreation area.  None are popular with neighbors, thus far. Hamann gained approval for industrial wind turbines as part of Tule Wind and has been pushing to convert another 765 acres to industrial solar as part of Soitec’s controversial proposed projects. The site hosted the groundbreaking for Sunrise Powerlink, drawing protesters from across the county.

Now, Hamann is also seeking a Major Use Permit to construct a conference retreat and wellness center and a campground on 713 acres. At capacity, the facility could house up to 2,600 people—or more than twice the current population of the entire town of Boulevard.

The project would include a lodge, 22 bungalows, a bunkhouse, one residence, a kitchen/communal living area, an agricultural building, hay barn, corrals, cold room building, auxiliary building, restrooms, and an existing helipad built by SDG&E.  A guesthouse and poultry coops would also be rebuilt.  In addition, the project would add two campgrounds with 149 campsites, two clubhouses, two swimming pools, an equestrian center, a 200-person ampitheater, archery course, skeet-shooting range, multi-purpose athletic field, plus widening and improving unpaved roads.  There will also be new ranch residences for employee housing and transient habitation, served by onsite septic and groundwater.  The project would be supported by 10 permanent and 20 temporary staff.

The site is subject to the General Plan Regional Category Rural Lands with a Land Use Designation of RL-80 (1 dwelling unit per 80-acres). Per the County’s Zoning Ordinance, the Campground Facility would be classified as Transient Habitation (Zoning Ordinance § 1545) as its primary use. Zoning for the site is A72 General Agricultural  which allows Transient Habitation with approval of a Major Use Permit...

Comments on this large-scale cumulative impact project are due by 4 p.m.May 12, 2014.

Obviously this jerk Hamann sees Boulevard not as a beautiful, quite, rural community to respect and work with, but as his own personal development litter-box to dump in and on as he sees fit. And isn't that the problem with so many proposals of this sort--from back-county monstrosities like the Sunrise Power-Link, Ocotillo and Tule "wind farms", Soitec solar fiascos, and hair-brained Hamann "wellness centers"? They never ask if it's right, only if it's legal; never if they should, only if they can.
Another destructive project in McCain Valley. Will the County Board of Supervisors override the many Significant and Unmitigable Impacts AGAIN? Will the Court be "Deeply Troubled" AGAIN? And in the end, will the project proceed as usual AGAIN? It all sounds so sadly familiar AGAIN. The handwriting looks to already be on the wall for McCain Valley's demise. Unless there's a change, nothing will STOP this project from becoming a sad realty.