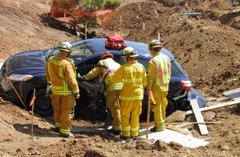 June 8, 2011 (El Cajon)--A driver traveling eastbound on Rea Avenue shortly before 3 p.m. today hit the gas instead of the brake. Her vehicle plowed through a round center median, launched through a temporary ramp and fence, then over a deep trench before landing in a construction site near El Cajon’s City Hall.

El Cajon Police and Heartland Fire & Rescue arrived on scene moments later and assisted the woman out of her vehicle to a waiting ambulance. Firefighter/paramedics found the driver was uninjured and she asked to stay on scene until her vehicle could be removed by a tow truck. No other injuries occurred.

The corner of Rea Avenue and Sulzfeld was closed for about an hour until the vehicle could be removed. The ramp is now closed for repairs.