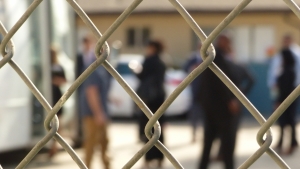 November 28, 2018 (El Cajon) -- Concerns over the safety and well-being of migrant children are rising amid disturbing reports of sexual abuse and medical neglect at federal detention centers in Arizona and Texas, as well as runaways from an El Cajon shelter who remain unaccounted for.

At least seven children ran away last year from Casa San Diego, a shelter for migrant children in El Cajon. But the shelter only reported three of those runaway children to the state Social Services Department, even though notification is required whenever a child goes missing.

The facility is run by Southwest Key, a Texas-based company that operates 27 similar migrant shelters nationwide.  It houses children and teens who came to the U.S. unaccompanied as well as children who were separated from their parents at the border by federal immigration officials.

An investigation by the San Diego Union-Tribune found that state officials met with Southwest Key representatives in September over concerns about reporting requirements that were not met.

In one of the cases, a youngster returned the same day he’d run off. In another case, the runaway turned out to be an adult falsely claiming to be a minor, who was turned over to Border Patrol.

But it is unknown what happened to the other five runaway youngsters. Most disturbing, a state official told the Union-Tribune that the agency has not received any follow up reports from Southwest Key on those children, who remain missing.

Earlier this year, a Congressional delegation that included San Diego representatives Juan Vargas and Susan Davistoured the Southwest Key shelter in El Cajon to inspect the facilities, but they were prohibited from speaking with any of the children.

With thousands of children still in federal immigration shelters, the missing children in EL Cajon has have heightened concerns over the welfare of children taken notcustody at our borders.

This week, the Associated Press reports, a mother filed a $60 million lawsuit against the federal government after her young daughter died of a respiratory infection contracted in a shelter operated by the federal governmentin Texas. The woman alleges that her pleas for her daughter to receive medical treatment were ignored and ICE eventually released her and her sick child onto the streets. The mother sought treatment, but it was too late to save her little girl.

Good detective work :-)
getting rich from the 501C loopholes. Who runs Southwest Key and how much do they make? Appears that this family has the system figured out... Amazing that a "poor boy" from Brownsville ends up with a Doctorate from Harvard and then uses that education to get wealthy from our tax dollars - That's the American Dream in action!
A very lucrative government contract for Southwest Key, and little to no oversight it would seem. Typical...