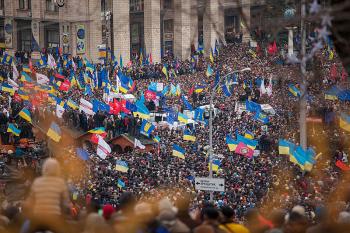 “My 17 year old friend was shot by snipers for delivering vegetables to protestors in independence square.”—Vera Skop, San Diego

March 14, 2014 (San Diego)-- Since the February 28th takeover of the Crimean region in the Ukraine by unmarked Russian troops, Ukrainians have been asking, “Are we safe from Russian expansionism?” In San Diego, with a population of approximately 15,000 Ukrainians, this has become a sensitive topic. Sources from Ukraine confirm that family members at home and abroad are equally worried about the escalating encroachment of Russia on the sovereign Ukrainian territory of Crimea.

The most shocking pronouncement came on Tuesday March 11th, when the autonomous Crimean authorities declared their independence from Ukraine, and further renamed the peninsula, The Republic of Crimea. On March 16th, the authorities in Crimea have vowed to still hold an official transparent referendum to decide whether or not to join the Russian Federation (crimea-parliament-independence-ukraine). The next logical question is, will the international community recognize this potential vote of succession as legitimate, legal, and binding if the vote passes?

To answer this question, we must first look back to November 21st, 2013,  when Viktor Yanukovych decided to give up joining the European Union (EU )in favor of accepting Russian monetary assistance. This pro-Russian move was seen as very controversial in Ukraine and inspired many citizens to take to the streets and to occupy city hall in early December 2013 for the Occupy Kiev protest. Amid the financial crisis in Ukraine, Russian President Vladimir Putin offered a $15 billion bond package to save the country from bankruptcy, which President Yanukovych gladly accepted.

By mid- January, the Ukrainian protesters in Kiev Independence Square were undeterred by new legislative actions of the Ukranian Parliament geared towards limiting citizens’ rights to protest. The bloody clashes between protesters and police only solidified the Ukrainian opposition to further Russian encroachment.

These latest Ukrainian protests, based on  what backers call the “fight for democracy and freedom” has reached across the globe, impacting Ukrainian ex-patriots locally.   Verk Skop, a San Diego resident and House of Ukraine volunteer in Balboa Park, told ECM that during the January protests in Ukraine, a “17 year old friend was shot by snipers for delivering vegetables to protestors in independence square.”  How could the Parliament of President Yanukovych condone the execution of its own people by sniper attacks, asks Skop, who supports the protesters.

On January 22nd, amid fears for his life, Yanukovych fled to Russian following massive protests in Kiev, forcing Parliament to appoint an acting President. Authorities in Crimea claim they do not recognize the new government of Ukraine as legitimate, or its interim President, former speaker of Parliament Oleksandr V. Turchynov.

On February 28th, the situation escalated when unmarked armed Russian troops and tanks violated Ukrainian sovereign territory by invading the region of Crimea (Ukraine-Russia-timeline). President Putin confirmed that his army’s invasion into Crimea was based on the provocation of “danger to ethnic Russians” in Crimea.

However, Mykhaylo Golovnya, a local San Diego Ukrainian, argues such claims are from the “Russian propaganda machine” and that “Crimea has always been very peaceful” and such “accusations are totally unfounded.”

On March 1st, Putin requested approval from the Russian Parliament to send military troops into Crimea to ensure the safety and security of ethnic Russians, and strategic interests (Ukraine Crisis Timeline). Parliament agreed to the President’s request, and since the end of February, Russian troops have seized control of all major cities, and airports in Crimea. In response, the international community has pleaded for a de-escalation of belligerent actions and military occupation of Crimea, which have gone largely ignored by Russian forces.

On March 4th, President Obama and Congress worked together to come up with a package deal to provide  $1 billion in US backed loan guarantees for Ukraine amid its financial crisis (Ukraine-us-aid). Similarly local Ukrainian activist Inna Zozulyak has been doing her part to gather available funds to send money home to family and friends. Zozulyak says, “The local Maiden U.S. support group has been involved in sending donations to the protesters” in Ukraine, hoping to effect greater democratic independence.

On March 6th, the autonomous government in Crimea voted to secede from Ukraine and formally asked to join the Russian Federation (world/Europe/Ukraine). Though under international law, the authorities in Crimea do not have the power to declare themselves a part of another country without a formal national Ukrainian vote. Furthermore, the potential annexation of Crimea to Russia would go against the 1994 Budapest Memorandum and Helsinki Final agreement.

President Obama and Secretary of State John Kerry have been hard at work to negotiate with Russia a de-escalation of military involvement in Ukraine. Ukrainian activist Zozulyak commented on Russian aggression saying, “We have seen the pattern of what he [Putin] has done in Georgia… expanding his [Russian] empire…he wants the whole pie.”

Will this upcoming March 16th referendum in Crimea give Putin the whole pie, or just a sliver?

The referendum asks the Crimean population to vote to either become a part of the Russian Federation, or to remain autonomous with closer ties to Russia. Many local Ukrainians feel that such a vote will lack democratic transparency and is illegitimate, due to the fact that Crimea belongs to the nation of Ukraine.

If the March 16th vote for secession continues as planned, what will such a vote mean to the interim government of Ukraine-- and how will the U.S. respond? How will the local diaspora population of Ukrainians in San Diego feel about their home country being torn apart? Will this action by Crimea lead to further protests or perhaps, a civil war?

For local Ukranians, the hope is that cooler heads will prevail and that Russia, Ukraine, and Crimea can all negotiate a bloodless solution to this territorial dispute.