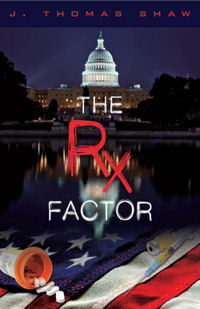 Book Review by Dennis Moore
Warning!
Do not start reading this book until you have the time to finish it. Ripped from the headlines, this novel of unrelenting suspense will keep you up all night and have you talking about it for weeks to follow.
June 5, 2012 (San Diego)--That is the caveat given by the publishers of this book written by J. Thomas Shaw, who co-founded one of the fastest growing independent mortgage banks in the United States. In most instances this type of hype does not live up to its billing. The Rx Factor is that rare exception! If I didn’t know better, I would think that The Rx Factor was a Robert Ludlum or John Grisham spy novel, reading like Ludlum’s The Matarese Circle. This book has everything that captivates one’s attention – conspiracy theory, sex, murder and betrayal, along with an intense love interest.
The author weaves his upbringing and background into this scintillating work of fiction, having lived for fifteen years in Chicago, six years in Durham, North Carolina, and traveled extensively throughout the Bahamas, the Caribbean and Mexico. As a matter of fact, the central theme of this book involves two competing pharmaceutical labs or clinics just outside Puerto Vallarta, Mexico, professing to have a miracle cure for ovarian cancer. Additionally, the central characters in this well written book, Ryan Matthews and Jordan Carver, have strong ties to Chicago, my hometown. As Shaw writes about the FBI’s involvement in the political and international intrigue in this book, operating out of their Dearborn Street location in Chicago, it resonates with me as I personally recall visiting and attending many meetings in this very same building many years ago.
With a hired assassin, under the guise of Chief of Security for Fisher Singer Worldwide, Inc., leaving a trail of bodies around the world – this suspenseful thriller is bound to captivate the reader. This fictional story was actually inspired by numerous true events, including the two news stories at the beginning of the book regarding pharmaceutical giant Pfizer. One of these stories indicated that a panel of Nigerian medical experts has concluded that Pfizer Inc. violated international law during a 1996 epidemic by testing an unapproved drug on children with brain infections at a field hospital.

Shaw’s book is basically a story of the extremes that the drug industry will go to for the almighty dollar. In an Author’s Note regarding the anti-ulcer drug Tagamet, which I actually once used myself, Shaw states: “To maintain sales of Tagamet, however,  SmithKline Beecham convinced the FDA to approve a watered-down version of Tagamet for a different application. One month after the patent expiration, Tagamet was approved as an over-the-counter treatment for routine heartburn.”
A sub-plot to the overall theme of the book seems to come out of the mind of Nazi Germany’s Josef Mengele, the Angel of Death, as stated: “Stage four is already well under way. We have begun developing a virus that once released, will spread around the world ending the misery of the habitually sick elderly population and stop them from sucking any more money out of their government. Of course, before that virus can be released we need to have the antidote that will prevent harm to the world’s productive citizens.” Scary stuff! This statement is actually out of the mouth of the fictional U.S. Senator McNally, who has a prominent role in the book. 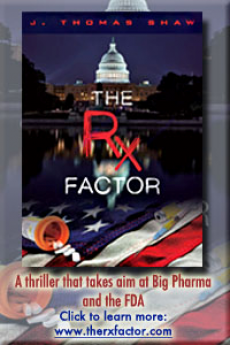 With the planned explosion of a luxury yacht and a surprise ending seemingly coming straight out of Hollywood, The Rx Factor, brilliantly written and conceived by Shaw, is bound to make a number of bestseller’s list, if not seen on a movie screen.  I can actually envision seeing Pierce Brosnan in the role of Ryan Matthews and Cameron Diaz in the role of Dr. Jordan Carver in a full-length movie version of Shaw’s book.  The fact that Matthews’ role as an ex-FBI agent, adds to the allure of the story.
The Rx Factor, by J. Thomas Shaw (Langdon Street Press, Minneapolis, Minnesota, 2012, 300 pages).http://www.therxfactor.com/

Dennis Moore has been a member of the San Diego Writers/Editors Guild and a freelance contributor to the San Diego Union-Tribune Newspaper, LifeAfter50 Magazine in Pasadena, California, EURweb, the Baja Times Paper in Rosarito Beach, Mexico, and he is the book review editor for SDWriteway, an online newsletter for writers in San Diego. He has written a book about Chicago politics, “The City That Works: Power, Politics and Corruption in Chicago.” Mr. Moore can be contacted at contracts_agency@yahoo.com or you can follow him on Twitter at: @DennisMoore8.

While at the downtown San Diego library this past Tuesday, I was pleasantly surprised to see another book that I had reviewed for the East County Magazine on display in the main lobby; J. Thomas Shaw's The RX Factor.

Great review!   Looking forward to reading the book. The book's genre... supense, mystery.., is what I read to relax although the genre of my book (s) is Christian fiction.

Check out my book "Sentenced to Life" at http://kaybaker.tateauthor.com  Christian fiction based on the true story of an ex-felon's survival and how she has overcome adversities in her life to become what she is today.

Thanks for the fantastic review. I am so pleased that you enjoyed the book.

John, I sincerely hope to see the next step of your fantastic book as a movie, hoping that my review has made some small contribution in making it a reality.