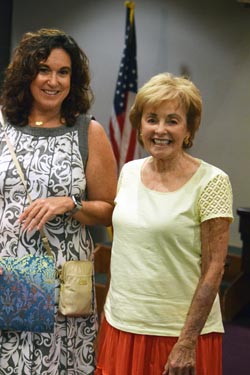 August 19, 2019 (San Diego) - With more than 100,000 students preparing to return to city schools on August 26, their safety is uppermost in the minds of those in charge of their education, San Diego City School Superintendent Cindy Marten told a small but animated gathering Sunday night at Tifereth Israel Synagogue.

“We owe it to all our students and their families to make our schools as physically safe as possible,” she told about 30 attendees of an Aug. 18 program sponsored by the Conservative congregation’s Men’s Club. “That is why we invested $15 million in emergency safety upgrades to our schools following the shooting at Parkland [Florida on Feb.14, 2018],” she said. “That was just the tip of the iceberg, and we have millions more planned in the near future – added fencing, improved communication systems, single points of entry.”

“There is a lot of work to be done, and we are committed to doing it,” Marten said. “We are one of only a handful of school districts in the state with our own police force. They understand my commitment to give them all the tools they need to keep our children safe.”

In a follow-up question and answer session, the school superintendent said whereas many schools in the eastern part of the United States have a central entryway with classrooms located off interior corridors, many California schools are spread out over larger pieces of property. This results in more possible ways that intruders could gain access to the schools – a situation which appropriate fencing could ameliorate.

Better communications could assure that the school public address system can be heard in the case of an emergency, she added.

“Following the horrific attack on Latino families in El Paso [on August 3] – families who had gone to the store to buy their back-to-school supplies – we all have a special obligation to our immigrant students to show them that they belong here,” Marten said. “We welcome them. I say that not just as the superintendent of schools … I say it as a member of this community. Our Jewish family has always been especially welcoming of immigrants because we remember the way others turned their backs on us. We remember the 937 souls on the MS St. Louis who were sent back to die in Nazi Germany, because this country did not want them here.”

She said she will travel in this upcoming week before the start of school “to let our immigrant families know that they are welcome.”

“We have schools where there are 38 different languages spoken. And every one of them is welcome,” she said.

Marten told the attendees at Tifereth Israel Synagogue that the school district has “invested heavily in anti-bullying programs, including the largest of these, the ‘No Place for Hate’ program managed by the Anti-Defamation League.”

Marten said that after controversy broke out about an ethnic studies curriculum proposed by a committee of the State Board of Education, the San Diego school district associated itself with objections filed by the Anti-Defamation League concerning the lack of teaching about the Jewish experience in the United States, the need to combat anti-Semitism, and to teach about the Holocaust.

Asked if the school district also opposed the now-rejected  state curriculum proposal to endorse a boycott of Israel — which essentially would have adopted the pro-Palestinian, anti-Israel narrative – Marten said she needed to check with her staff to clarify what position was taken.

The ADL statement with which the school district associated itself, said this about the BDS campaign:

“The campaign to delegitimize Israel is being waged across the globe: The Boycott, Divestment and Sanctions movement (BDS), which rejects Israel’s right to exist as a Jewish state, is the most prominent effort to undermine Israel’s existence. The BDS campaign is rampant with misinformation and distortion. ADL responds to BDS threats through advocacy and education, and we recently partnered with Reut Institute to develop in-depth analysis and strategic initiatives to marginalize and expose the illegitimacy of the BDS movement.

Andrew Sharp, the school district’s chief public information officer, subsequently telephoned this reporter to say that San Diego Unified School District has its own ethnic studies curriculum, which was developed with input from many ethnic communities, including the Jewish community. He said that the tenets of the Boycott, Divestment, and Sanctions (BDS) campaign against Israel definitely will not be taught in San Diego schools.

On the issue of bullying, Marten said the schools will strive “to teach tolerance, to protect students from bullying, to learn to respect each other and themselves.” She added: “We all know what happens when children do not learn that lesson. We are less than 30 minutes drive away from the Poway synagogue [Chabad of Poway] where Lori Gilbert Kaye lost her life defending her rabbi [Rabbi Yisroel Goldsein] from an anti-Semitic gunman. Lori was a San Diego Unified graduate. We owe it to her memory to confront the hate that took her life.”

Marten said the city schools “have recognized the second week of every February as Gun Violence Prevention Week in honor of the Parkland victims,” who attended Marjory Stoneman Douglas High School, where 17 students and staff were killed and 17 others were injured. “Our Board of Education unanimously passed a resolution calling for federal background checks for gun and ammo purchases, a ban on semi-automatic firearms, high capacity magazines and bump stocks,” she said. “It also called for the reinstatement of the federal assault weapons ban.”

Not far from Tifereth Israel Synagogue, in the San Carlos neighborhood of San Diego, is the former site of Cleveland Elementary School, upon which Brenda Spencer, 16, fired in 1979 from her home across the street, killing principal Burton Wragg and custodian Mike Suchar, and injuring eight children and a police officer. Asked why she did it, Spencer infamously stated: “I don’t like Mondays.”

Marten said she is reminded of this incident every day that she goes to work at the San Diego Unified School District offices in North Park where a memorial has been erected in memory of Wragg and Suchar.

“We held a small gathering this year to mark the 40th anniversary of the attack, and one of the students who survived that day was there,” said Marten.  “If you had heard his story about the lifetime of agony and doubt he has lived as a result of that attack, I know you would not hesitate to get a gun violence restraining order out for anyone who might pose a risk.”

She explained that “if you know of someone with a gun who is going through troubled times for whatever reason, you owe it to that person, to yourself, and your community to get that gun removed. We have information on how to do it on our website.

Turning from safety to innovations in the schools, Marten said a pilot project will be launched this year in three high schools to begin classes at 8:30 a.m., instead of an hour earlier. She said these “healthy start times” will spread in subsequent years to all high schools in the district.

“”The scientific research on this is clear,” she said. “Teenagers do not get enough sleep, and moving back high school start times produces students who are better rested and better able to perform academically.”

Marten said “there has never been a better time to be a student in San Diego Unified.  our elementary and middle schoolers are outperforming their peers nationwide on tests ranking the best big-city school systems in America.  our high schoolers are graduating more prepared than ever for college, and more of them are enrolling in college than ever.”