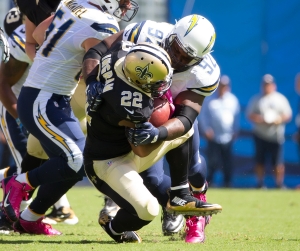 October 3, 2016 (San Diego) - The Chargers are probably over heartbreaking losses this season.  They came back to the Q and were ready to win today.  Unfortunately for them, the 0-3 Saints were desperate for a win too.

Who Dat Nation came out swinging on their first drive. Mark Ingram ran the ball in after marching down the field and the Saints were up 7-0 early.  But the Chargers--more specifically Hunter Henry--redeemed himself with a wide-open touchdown pass with a minute left in the first quarter to tie the game at seven.

But in the second, the Saints went up by seven again when at the goal line, Drew Brees flipped a pass to John Kuhn and the Saints led 14-7.  But that wasn’t a big deal for Philip Rivers and Dontrell Evans.  Rivers aired the ball and Evans took it downfield 57 yards and the Chargers tied the game at 14.  The Bolts couldn’t make anything out of an interception, but Josh Lambo hit a field goal and the Chargers took their first lead of the game, 17-14.  At the buzzer, the Chargers scored another touchdown on a Melvin Gordon run to go up 24-14 at the half. 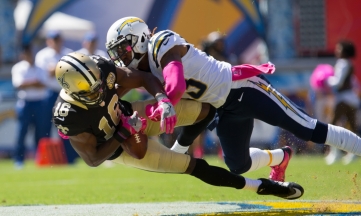 In the second half, Kuhn rushed it in in the third for his second touchdown of the day and the Bolts’ big lead was cut to three, 24-21.

In the fourth, Gordon ran it in at the one for his second rushing touchdown of the day and the Bolts pulled ahead by 10, 31-21.  Lambo added a field goal and it was 34-21 Bolts.  Late in the fourth, the Saints capitalized on a fumble close to the endzone by Gordon and Brees made the crucial pass on fourth down to the rookie Michael Thomas for the touchdown and the score was narrow again; 34-28 Bolts.  And once again, the Chargers’ fourth quarter woes strike as, after another fumble by Travis Benjamin, Kuhn rushed in uncontested for his third touchdown and the Saints took a 35-34 lead.  The Chargers tried one more time, but they were stopped by an interception and the Saints hung on for their first win of the season, 35-34.  Both teams are now 1-3.

Get ready; the rival (in football and stadium) Oakland Raiders will play host to the Chargers next Sunday.  Kickoff is at 1:25 p.m.