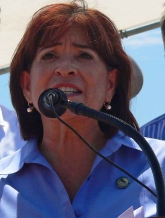 July 12, 2010 (San Diego) – Assemblymember Mary Salas, candidate for State Senate in the 40th District, has filed the necessary paperwork calling for a recount in the race for the 40th Senate District. A mere 22 votes, or less than one half of one percent, separates the two candidates.

Unlike other states, California does not have an automatic recount no matter how close the race.  So costs of the recount will be born by the Salas campaign, not taxpayers.  Costs of the count have not yet been determined.  A campaign insider indicated that discussions are underway to determine how widespread the recount will be in the race, which spans portions of Riverside, Imperial and San Diego Counties.

“The voters have a right to make sure their votes were counted accurately, and 22 votes are well within the margin of error,” said Salas. “The people of the 40th Senate District deserve the right to have their votes counted correctly and the best way to do that is with a manual recount. Even though the county election officials do a great job, with this many votes there are often small mistakes that could make the difference in a race as close as this one.”

Votes initially were counted on electronic tabulating machines, but will now be tallied by hand.  Hand tallies in other areas have sometimes turned up discrepancies such as circles not fully filled in by voters or marks outside the circles that may be miscounted by machines. A hand-count may also reveal instances of errors by scanning or computer programming, as well as manipulating of vote-tabulating software. In one Ohio county, a hand recount turned up obvious fraud: orange stickers had been placed over punchcard holes next to John Kerry's name in the 2004 presidential race.

With deadlines for the November ballot fast approaching, the questions of how extensive the recount will be and how long a major recount may take remain unanswered.