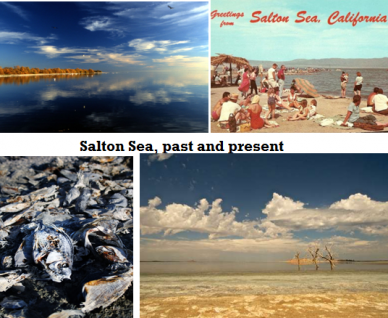 November 9, 2015 (Salton Sea)--The Salton Sea is an ecological disaster poised to get even worse in three years, when water flowing into the lake from the Colorado River is scheduled to be shut off. Already, the inland lake smells like rotten eggs, contaminated by toxic run-off. As it evaporates, pollutants threaten air quality in both Imperial and San Diego counties. It also threatens the many migratory and waterfowl birds in this rich but vanishing habitat.

But this week, the tide is beginning to turn. The U.S. Fish and Wildlife Service is beginning the first restoration project at the Salton Sea along Red Hill Bay on the southern shore. The project will flood 420 acres of exposed lakebed with water from the nearby Alamo River and the lake, creating wetland habitat for migratory birds and also keeping toxic dust out of the air, while still leaving room for energy companies to tap the region’s vast geothermal potential.

While this project is only a drop in the bucket toward restoring the total lake, it’s a start. But big investments will be needed to do more.

In July, East County Magazine interviewed Bruce Wilcox with the Imperial Irrigation District, manager of Environmental and Salton Sea programs. Click hear to listen to our interview, in which he discusses the new Salton Sea Restoration and Renewable Energy Initiative and efforts to save the Salton Sea.