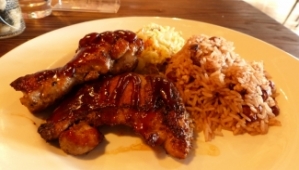 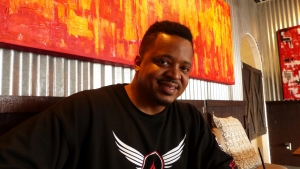 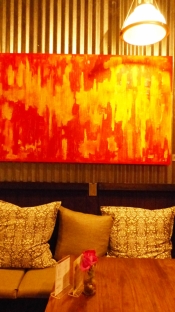 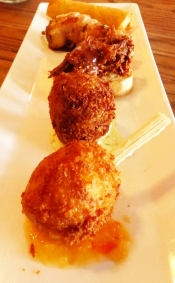 Seated at a corner table with bench seats, comfy cushions, flowers and brightly-hued  contemporary artwork,  I started my feast with a “Rose Cheeks” cocktail of vodka, mint, strawberry and lemon juices—light and refreshing.

Next up, I sampled an array of internationally-themed appetizer samples with flavors from the Philippines, New Orleans, Jamaica  and  Sicily, plus some original twists.   A buffalo chicken lollipop with zesty citrus habañero  sauce complemented a pomegranate pulled pork bruschetta, lumpia, bacon-wrapped Jerk chicken and mustard dill crab cake.

Jamaican Jerk Chicken  with coconut rice and beans  proved a tasty and satisfying entree.  “My mother actually comes and makes it,” Chef Cole says of the spicy jerk sauce complete with ginger, peppercorns, onions,  and habañeros.

If you love the sauces, which I highly recommend, you can take a bottle home.  You can also order up a bottle of Admiral’s chardonnay or cabernet sauvignon, all California wines. 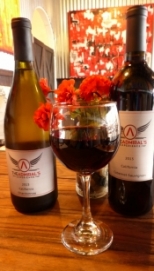 The restaurant has excellent service,  making sure every guest feels as special as an admiral.  You can also enjoy live music every Friday night.  The restaurant also gives back to active duty military, veterans and spouses  with a 20% discounts on “military  Mondays.”

Thankfully, you won’t have to sail the seven seas to savor the flavors from the farthest reaches of the globe.  Just stop by Admiral’s Experience, open seven nights a week, to launch your culinary voyage.

Admiral’s Experience is located at 7407 Jackson Drive in San Diego,  at the corner of Jackson Drive and Navajo Road.  The website is http://www.admiralsexperience.com/restaurant.html