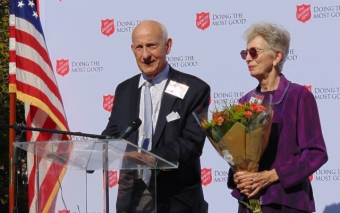 By Chris Jennewein, credit to Times of San Diego, a member of the San Diego Online News Network

Photo:  Ernest and Evelyn Rady at the Salvation Army’s Door of Hope in Linda Vista. Photo by Chris Jennewein

The $50 million lead gift is part of an $80 million capital campaign to build and endow two new facilities with programs designed to provide shelter for many of the city’s thousands of homeless.

The gift, announced at a ceremony at the Salvation Army’s Door of Hope center in Linda Vista, will support construction of the Rady Residence for homeless families and children on the site. The residence will have 32 apartments.

A second facility, the Rady Center for single men, will be built downtown after the Salvation Army raises the additional $30 million to complete the capital campaign.

Randy expressed “great confidence” in The Salvation Army’s work and said he looked forward to successful completion of the buildings.

“Evelyn and I decided to make a gift that will make a difference,” Rady said at the ceremony. “Thank you Salvation Army and thank you San Diego for a wonderful, wonderful life.”

The donation will be one of the largest charitable gifts ever made to support homelessness and is the third largest donation in The Salvation Army’s 153-year history.

“The Salvation Army is deeply moved and inspired by Mr. and Mrs. Rady’s generosity and caring. Our vision for helping the homeless better their lives and find homes will now become a reality for our community,” said Major George Baker, Salvation Army divisional commander. “The center will serve as a new standard for effective programs and housing for homeless across the United States.”

San Diego is experiencing a homeless crisis. San Diego County currently has the fourth largest homeless population in the country, with an estimated total number of homeless of over 9,000, with nearly 6,000 unsheltered.

The donation to The Salvation Army is the second to a social service organization in the past week. On Thursday, Rady announced a $20 million commitment to Jewish Family Service of San Diego.