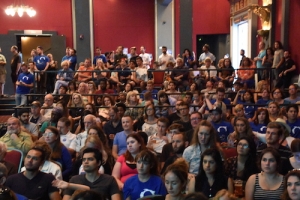 August 3, 2015 (San Diego) – Insurgent presidential candidate Bernie Sanders’ campaign is setting records for huge crowds even in places thought to be conservative strongholds.    Sanders, a Vermont Senator, drew more than 100,000 people at rallies nationwide including 29 rallies in San Diego County that drew thousands of local people, with 500 at the largest San Diego rally at the North Park Observatory Theater.

His unapologetically liberal message repeated at every stop is “This great nation deserves to be run by the people, not a handful of billionaires.”  Sander wants to increase Social Security and raise the minimum wage.

He has challenged Hillary Clinton for her wavering on the XL Pipeline and the Trans-Pacific Partnership (TPP). Yet this rumpled, white haired, self-professed socialist running as a Democrat is drawing enormous crowds.  There were 11,000 in Phoenix, 8,000 in Dallas, 2,500 in Council Bluffs, Iowa—the largest turnout of any candidate from any party in the first-to-vote primary state.  Waving his arms in wide gestures, Sanders rants about income inequality.

On July 29th Sanders campaign held the largest digital organizing event in the history of this country.   Hundreds of San Diegans attended the digital rally at the North Park Observatory Theater.  Nadin Abbott, writing for Reporting San Diego, posted that the first thing Sanders said in a video broadcast nationwide was “Enough is enough. The American People in our great country believe that our government should belong to all of us.” He added, “We cannot continue to have the most unequal income distribution of any country on Earth.” He went on to explain that almost all income created in the country is going to the top 1 to 2 percent.”  Read the full story: http://reportingsandiego.com/2015/07/30/at-least-500-san-diegans-show-up-for-bernie-event/

Not since the campaign of former Vermont Governor Howard Dean has there been this kind of groundswell this early in the campaign.  The Sanders campaign is following the same successful strategy of Barack Obama’s 2008 campaign with early grassroots organizing and extensive use of social media.