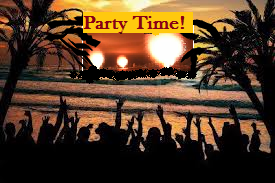 April 1, 2013 (Ocean Beach)-- Hundreds of San Diego residents have flocked to the beach to begin a vigil watching for incoming missiles that the North Korean government announced  it intends to launch against U.S. military bases  in an effort to turn our nation into a “boiled pumpkin,” in the words of dictator Kim Jun Un.

The U.S. State Department officially maintains that the threats are merely “bellicose rhetoric” and that the missiles can't reach our shores.

Undaunted,  San Diego beach residents are organizing  “an end of the world party to end all parties,” as a flyer posted in Ocean and Mission Beach proclaims. After Kim Jun Un was photographed with a map of possible targets, San Diego  was clearly in the bullseye--a fact not lost on students  eager for any excuse to party over spring break.

Kim Jun Un has actually declared war on South Korea as well as threatening military action, including launch of nuclear missiles, against forces of "imperialism."  The Korean leader stated, “The time has come to stage a do-or-die final battle.”

“Dude, it's obvious that we're toast here and like, what can we do against rockets? That's what the Army is for,”  said Sandy “Surf Dog” Shores.   Grabbing his awesomely waxed surfboard, he added, “I’m planning to ride the end-of-the-world wave when those bombs start hitting the Pacific. Cowabunga!”

Bud Wiser was far more stoic, and drunk. “I think Sandy means Air Force. Or maybe Navy.  Whatever. If our military can't stop those bombs, we'll have the sunrise to end all sunrises.” He said his goodbyes and went to the bar to get another read of the declaration.

According to the declaration, the first strike of the North Korean revolutionary armed forces “will blow up the U.S. bases for aggression in its mainland and in the Pacific operational theatres including Hawaii and Guam,” reducing  those areas to “ashes.” Austin, Texas has also been threatened though nobody has a clue why.

Meanwhile revelers along San Diego’s beaches are readying for the end times with bonfires, keg parties (in defiance of the city’s booze ban at beaches), and even illicit fireworks—determined that this will be the party to outdo all past end-of-the-world parties, including the Y-2-K and Mayan Prophesy doomsday celebrations.