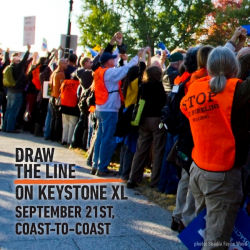 September 20, 2013 (San Diego) -- Over 100 San Diegans will gather outside the Federal Building downtown on Saturday to call on President Obama to reject a permit for the Keystone XL Pipeline, which would carry tar sands oil from Canada to Texas for refining and export. San Diego’s event is one of roughly two hundred “Draw the Line” events planned around the country, part of a nationwide day of action sponsored by 350.org and other climate action groups.

President Obama has said he would approve completion of the 1,700-mile pipeline from Alberta to Gulf Coast refineries only if it would not “significantly exacerbate” carbon pollution, adding that the pipeline’s net effects on the climate would be “absolutely critical” to his decision.

350.org contends that the pipeline would increase pollution by the equivalent of adding 9 million cars to the highways, also creating water pollution and other problems.

“San Diegans will call on President Obama to reject the Keystone XL Pipeline, and will put him on notice that over 75,000 Americans have taken the Keystone Pledge of Resistance  and committed to civil disobedience if the State Dept gives the pipeline the go-ahead,” a press release issued by the group states.

Activists will carry a 50-foot cardboard sign depicting the Keystone Pipeline around the Federal Building, after which there will be speakers, including Lori Saldaña (former Assemblywoman and Chair of the San Diego Chapter of the Sierra Club), Rev. Dr. Beth Johnson (Minister of Palomar Unitarian Universalist Fellowship in Vista), Matt Cappiello, a USCD medical student who was one of over 1,200 people arrested in Washington DC in 2011 while participating in civil disobedience against the keystone pipeline, and ten-year old activist Siena.

. Draw the Line is hosted by 350.org, an international grassroots climate organization. Locally, the event is being organized by SanDiego350.org and is supported by Sierra Club San Diego, Greenpeace, Citizens Climate Lobby and other local organizations.

"over 75,000 Americans have taken the Keystone Pledge of Resistance  and committed to civil disobedience"

Bullies making threats, that's the way to get your viepoint dismissed by intelligent people.