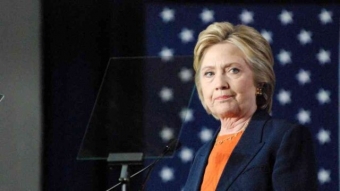 August 9, 2016 (San Diego) -- The San Diego parent of an American killed during the 2012 terrorist attack in Benghazi, Libya, is suing Hillary Clinton over the incident.

The conservative advocacy group Freedom Watch filed the suit Monday in Washington on behalf of Patricia Smith of San Diego, whose son Sean Smith was a State Department officer, and Charles Woods of Portland, OR, whose son Tyrone Woods, a former Imperial Beach resident, was CIA security contractor.

Four people, including Smith and Woods, died after an anti-American militia group attacked the U.S. diplomatic compound on Sept. 11, 2012.

The suit alleges the Democratic Presidential nominee contributed to the deaths of both men, as well as defamation and intentional and negligent infliction of emotional distress.

“Having used a secret private email server that we now know was used to communicate with Ambassador Christopher Stevens with confidential and classified government information, and which we now know was likely hacked by hostile adversaries such as Iran, Russia, China and North Korea aligning with terrorist groups, it is clear that Hillary Clinton allegedly negligently and recklessly gave up the classified location of the plaintiffs’ sons, resulting in a deadly terrorist attack that took their lives,” Freedom Watch founder Larry Klayman said in a statement.

Last week, Dorothy Woods, the widow of Tyrone Woods, said Clinton is unfit to be commander in chief.