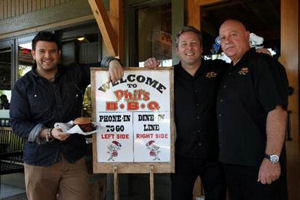 Phil’s BBQ El Toro tri-tip sandwich takes one of ten regional titles to advance to the final round
July 19, 2012 (San Diego) -- On Wednesday, July 18, 2012, Phil’s BBQ was named the West Coast Regional Winner of the Travel Channel show “Adam Richman’s Best Sandwich in America.” Phil’s El Toro tri-tip sandwich is one of ten regional winners that will move on to the final round of judging, where one sandwich will be named Best Sandwich in America.  There’s good news for East County foodies:  Phil’s BBQ will be coming to Santee this fall. (Here’s a clip of the Phil’s BBQ segment.)
“It’s really exciting,” said Phil Pace, owner of Phil’s BBQ. “Only a handful of sandwiches in the entire nation were chosen to compete, so to be among the best of the best is a huge honor.” Richman selected 30 sandwiches from 10 geographical regions across the country to face his BITE scale (Bread, Interior, Taste, Eating experience). The sandwich with the highest score from each region advances to the finals to face off against each other, plus two wild cards, to claim the national title.
Phil’s BBQ faced off against Los Angeles based JR’s BBQ (Pulled Pork Sandwich) and San Francisco’s Wexler’s (“Pulled” Lamb Sandwich). “The El Toro, to me, is without question one of the best sandwiches in America,” Richman said. “[It’s] one of my favorite sandwiches anywhere. Til [Phil] came along, no one had dreamed of putting tri-tip between bread.” Pace says, “Everybody has a beef sandwich. I don’t like to be like everyone else. I always like to be different and one step ahead.” The El Toro is packed with mesquite-grilled, deli-sliced tri-tip and topped with Phil’s signature BBQ sauce. It has been a staple on the menu since doors opened, and is a fan favorite at both the Point Loma and San Marcos locations, as well as Phil’s catered events.
“We love having Adam come visit us, and apparently he loves coming here too, so it works out well,” Pace added. Richman has previously visited Phil’s BBQ while hosting his first television program, Man v. Food. To see if the El Toro takes home the national title, tune-in to the one hour season finale of Adam Richman’s Best Sandwich in America, airing on Wednesday, August 15 at 9:00p.m. EST on the Travel Channel.