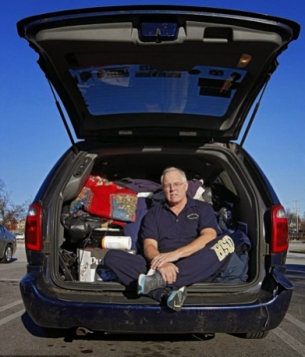 Update May 15, 2019: The San Diego City Council has voted to approve the new vehicle habitation ordinance.

May 13, 2019 (San Diego) – After a federal judge found San Diego’s vehicle habitation ordinance unconstitutional and issued an injunction to halt its enforcement of the ban on sleeping in vehicles, a new ordinance backed by Mayor Kevin Faulconer has been passed 3-1 by a committee and forwarded to the full city council, where a vote is expected on Tuesday, May 14 at 2 p.m.

The San Diego Housing Emergency Alliance opposes the ordinance, which they say criminalizes homelessness and will create a system of “poverty apartheid.” The group plans a rally and news conference in Civic Center Plaza at 12:30 p.m.
Faulconer says the ordinance will provide help to the homeless while preventing "conduct that takes advantage of San Diego’s generosity and destroys the quality of life in our communities,” NBC 7 reports.
The proposed ordinance includes a "safe parking program" that would designate certain lots in the city that car-dwellers could stay at overnight, including an overflow parking area near the stadium in Mission Valley. At the lots, homeless San Diegans could also access resources to help get them into more stable, long-term housing through partnerships with other organizations. But the ordinance would ban people living in vehicles from parking in residential areas or close to schools, even during the daytime.  Critics say this will lead to fines and arrests, further deepening the financial hole for those who are homeless.
“Criminalizing and demonizing the victims of this crisis – people with disabilities, seniors and low income families - is not the answer,” said Ann Menasche, Senior attorney with Disability Rights California.  “Our clients have been priced out of housing due to skyrocketing rents. They have been denied real choices. The real emergency is not people using their vehicles to stay out of the elements.  The real emergency is the lack of affordable housing. Instead of continuing this war on the unhoused poor, instead of establishing a system of poverty apartheid against people forced to live in their vehicles reminiscent of the old days of South Africa, we need to create permanent affordable housing solutions.”
The San Diego Housing Emergency Alliance (SD HEMA), a grassroots coalition of San Diego organizations and individuals, including people with disabilities, tenants, low wage workers, LGBTQ individuals, students, people of color and people who are or have been homeless.   SD HEMA’s goal is to grow a grassroots movement to recognize housing as a basic human right.

Local & State Government has lost it. Governments were established for "essential services" and now take their paychecks and feel they have to crank out policy or law to justify their worth. This issue is Unworthy of what should be credible "Representative" Government.