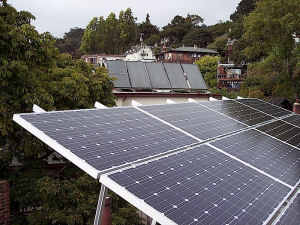 Much to the chagrin of California’s three public utilities companies, residential solar is booming

January 15, 2013 (San Diego)--According to the Vote Solar Initiative, 1,400 megawatts (MW) of PV installations are now operating on the homes or businesses of 134,000 Californians. In a recent study, they conclude that, the benefits to ratepayers in SCE, PG&E, and SDG&E territories will be around  $92.2 million a year “by the time the state’s net metering program is fully subscribed at 5% of peak demand.” Two thirds of these installations are in low and median income neighbourhoods.

Pacific Gas & Electric, Southern California Edison, and San Diego Gas & Electric have become increasingly critical of net metering which, according to a Vote Solar Initiative PRnewswire, “reduces their ability to justify the capital investment infrastructure projects that earn them a guaranteed profit.”

According to Vote Solar study, net metering (NEM) “removes what might otherwise be a substantial barrier to customer acceptance of DG systems as integral features of their homes and businesses. NEM does impact other, nonparticipating utility ratepayers, because a minority of the power produced is exported to the grid and is credited to the customer-generator at the full retail rate.”

“When someone decides to put solar panels on their roof, they not only generate clean power, but also reduce strain on the electric grid while offering financial benefits to all ratepayers,” said Adam Browning , Executive Director of The Vote Solar Initiative in a PRnewswire. “We’ve got a long way to go in revamping an antiquated energy grid and growing California’s clean economy, and net metering is critical to those efforts.”

In addition to the bill-saving ratepayer benefits outlined in the study, solar provides environmental, public health and economic benefits. Thanks to policies like net metering, California is home to a fast-maturing solar industry, which now employs over 43,000 Californians and has attracted over $10 billion in private investment.

“It’s crystal clear that the way we produce and consume electricity needs to evolve,” said Daniel Kammen , University of California Berkeley Distinguished Professor in the Energy and Resources Group (ERG), and Professor of Public Policy in the Goldman School of Public Policy. “The good news is that net metering is doing what it was designed to do—accelerating solar adoption while reducing our dependence on dangerous fossil fuels and kick-starting one of the most promising job-creating industries of the 21st Century. Solar produces energy at the times of highest cost to the utilities, so with the right market incentives, it is a simple ‘win-win-win’ for ratepayers, utilities, and the environment.”

Erica Johnson, the Director of Community Relations and Development for Sullivan Solar Power, added that, “This Net Energy Metering debate will continue to unfold between the utilities and the solar industry. While the utilities are interested in maintaining control of our energy supply and talk about solar adding “costs”, the truth of the matter is that solar adds a huge benefit to the grid – millions of dollars of private investment has gone into putting solar power on the utility grid from homeowners, businesses and municipalities alike. Esstientially, solar generators serve as mini power plants to the utilities. “

Sullivan Solar Power, the county’s largest residential installer, is  hiring people for their San Diego, Riverside, and Irvine offices. Johnson says the number of company employees has doubled every year since the company was founded in 2004. They currently need people for positions in Marketing, Sales, and Administration. Sullivan Solar’s revenue have grown from around $17 million in 2011, to around $22 million in 2012. Johnson expects revenues to be even higher in 2013. She says part of the reason for this increase is the fact people don’t have to pay for installations upfront, they can lease  and their monthly payments are often less that what they would pay the utilities companies.

Michelle Joyce, from OneRoof Energy,  says that more than 70% of California’s installations are leased. Her company – which develops, owns and operates solar generation systems – has tripled in size over the past year. Their workforce has grown from 30 to 100 and they have opened offices in Colorado, Arizona and Hawaii.  She expects this trend to continue in 2013.

San Diego’s residential solar industry is booming. The receptionist at Hardy Solar was too busy to talk and asked if I could call back on Wednesday.  Clary Solar is an installation company, whose business increased by 50% last year and, thanks to San Diego’s rising utility bills, they expect this trend to continue. Aaron Hauser told me that people look at their bills and start looking for alternatives. Simon White, from Solar Energy San Diego, agreed. Most of their customers are concerned about saving money, rather than being “green”. Though utility rates keep rising, you can lock in for 10 or 20 years with solar. White said they installed more systems in 2012 than the year before and predicts they will do even more business in 2013.

Yet, as Johnson explains, “There is definitely a lot of room for the generation of solar to grow. San Diego is the solar capital of the nation, with more solar power rooftops and capacity installed than any other city in the United States. Still, even in San Diego, less than one percent of our energy is from solar energy.”