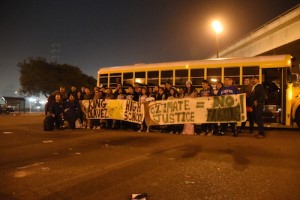 February 7, 2015 (San Diego) On Feb. 6, at the stroke of midnight, the busses left the Old Town Transit center parking lot. On board were activists from SanDiego350, as well as students from King Chavez Community School in downtown San Diego with their teacher, Keith Fowler.

They were en route to the March for Real Climate Leadership. In Oakland California, they were to march with an expected group of 10,000 people from multiple organizations, among them Sierra Club and the Backbone Campaign.

Reporting San Diego talked with Peg Mitchell of San Diego 350 before she boarded the bus. She told us, that fracking is happening in Kern County where we are “depleting our water sources, and we also grow our food.” This is where she took the students from the school in December for a class trip. The students were shocked at what they saw there.

We also asked why fracking is a problem? As Peg Mitchell put it, “When you hear the term conventional oil, that is the type of drilling where you can drill a hole into the ground a couple hundred feet and you hit a gusher and all this wonderful oil spews forth.” She pointed to the Beverly Hillbillies as a good example of what that looks like.

This is the cheap oil to extract and that is pretty much gone. What fracking, or by the technical term, hydraulic fracturing does, is that it injects water and chemicals under great pressure into the ground, breaking the rock. This releases a form of oil that is more like a sludge, that is also more damaging to the atmosphere. The water used in the process is also lost from the water cycle since it is extremely toxic. It is partially being reused in fracking operations, but in the middle of a historic drought this is also affecting the available water we have.

Reporting San Diego also asked Yunitzy Rico, one of the students making the trek, why? She said that we all have to do this to protect future generations. She intends to be an activist from now on, in order to stop climate change and ensure a better life.

We asked if she intends to go into politics, where a lot of these decisions are made, after she graduates. She intends to, so she can educate policy makers on the issues.

Keith Fowler, their teacher, and Vice Principal at the King Chavez School was very proud of young people who are concerned, and are getting their feet wet in activism.

What was the objective of this march? According to Mitchell they want the governor to show real leadership and ban fracking in the state. Governor Jerry Brown would be joining not only New York’s Governor Andrew Cuomo, who has banned the practice. He would also join France that has done such as well as both Scotland and Wales which have passed resolutions, and a few other European Union States are considering this. Among them Poland.

According to the Backbone Campaign, “Just last year, the Big Oil lobbying group, Western States Petroleum Association, spent more than ANY other group — nearly $8.9 million — to lobby the California state government to grease the wheels for future drilling projects. It is going to take a major national movement to fight back against Big Oil’s unlimited resources. And today’s climate march is just the beginning!”

While this is an uphill battle, it is not an impossible battle. As an Ocean Beach resident put it, this will take people in the streets.