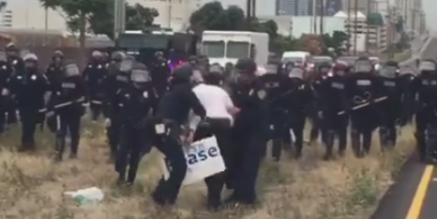 SDPD has defended its actions, which included declaring an unlawful assembly and using a line of police in riot gear to force protesters and others to move from downtown to Barrio Logan.  A total of 33 arrests were made, including a San Diego City Attorney candidate.  The ACLU isn’t the only one seeking information; yesterday the San Diego Union-Tribune reported its request for body camera footage from police during the actions has ben denied.

Along with Alliance San Diego, the American Friends Service Committee, National Lawyers Guild and Union Del Barrio, the San Diego ACLU has been responding to community members’ questions and complaints in the aftermath of what community leaders believe was an unacceptable show of excessive force by SDPD against peaceful protestors. Citing the California Public Records Act (CPRA), the ACLU is requesting the following information:

Because of the palpable feelings of apprehension and frustration felt particularly by residents of the Barrio Logan neighborhood, the San Diego ACLU additionally requested specific information on the events that took place there at approximately 4:20 PM. The stark difference in approach compared to other, similar peaceful demonstrations, including the use of riot gear, tanks (or tank-like vehicles), prompted the ACLU to ask for more information to determine whether SDPD’s action deviated from standard SDPD protest protocol in anyway.

The coalition members were disturbed last night to read the log of the 33 people arrested at the protest. Nearly half of the arrests occurred in Barrio Logan, and a young boy of color faces the most serious charges.