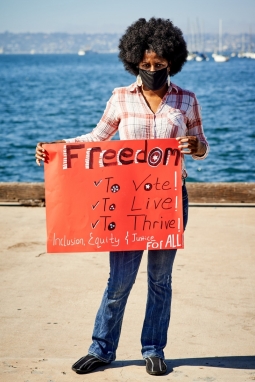 Following Trump’s press conference and tweets labeled “misinformation” by Twitter, mobs of Trump supporters showed up outside vote tabulating centers in swing states, hypocritically calling for vote counting to continue in Arizona, where Trump trails Biden, while demanding that vote counting be stopped in states such as Pennsylvania, where Trump is ahead but his lead is dwindling as more ballots from heavily Democratic districts are being counted. 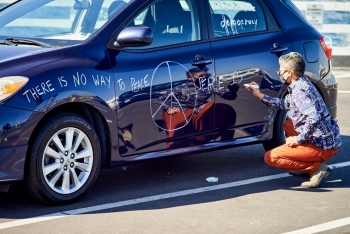 The caravan with dozens of vehicles convened outside the San Diego County Administration Building on Pacific Highway, then drove through San Diego neighborhoods as far east as City Heights before returning downtown. Yesterday’s event locally was held in solidarity with similar organizations nationwide.

Photo, right: Frances Yasmeen Motiwalla, who ran for California's 34th Congressional district, paints messages on her car in preparation for the caravan.

Federal law does not require states to certify election results until December 8, a week before the Electoral College convenes to formally elect the next president.  Although some speakers noted that it could take weeks for results to be known, CNN currently projects Biden has 253 electors and Trump 213.  A total of 270 are needed to win.

If Biden retains his lead in Nevada (6 electoral votes) and Arizona (7), he wins.  Or if Biden wins Pennsylvania (20), where he is rapidly closing the gap, he wins. Biden also has a path to victory if he wins Georgia or North Carolina, along with any one of the other states where the counting continues.  Trump curren 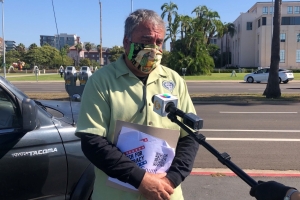 tly leads in Georgia and North Carolina, but the lead in Georgia is shrinking as votes from heavily black areas formerly represented by the late Congressman John Lewis. For Trump to win the presidency, he would have to win several of the remaining states.

An announcement of a projected winner in the presidential race could come as early as today, depending on when the remaining states complete their counts and what the outcomes are in those battleground states.