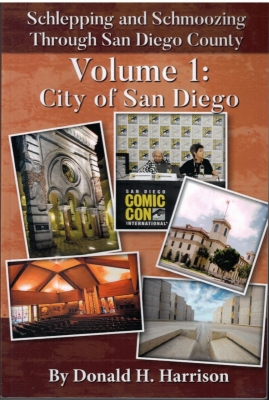 By Mimi Pollack
October 25, 2019 (San Diego's East County) - Whether you are new to San Diego are or an old-timer, I think it is always interesting to learn about local places and people.  “Schlepping and Schmoozing through San Diego County, Volume One” is a new book by Donald H. Harrison.  It is filled with stories about people and places in San Diego County with a Jewish twist.  This is a bonus for San Diego, a place more known for its military presence, not its “Jewishness” unlike New York City.
Harrison is actually from New York, but moved to California as a teen with his family.  He is now practically a native Californian. He brings to this book a keen journalistic eye as he has worked in the field of journalism for various publications, as well as his own, since 1962. He also has a deep sense of Jewish history and culture. In addition, he worked in public relations in San Diego for several years.
The nice thing about this book is that you can either read it cover to cover or go through the extensive Table of Contents and choose the chapters that catch your eye. The book is in chronological order starting in 1987 and ending in 2019.
I did the latter and there were 18 stories that I was particularly drawn to read, such as his stories on immigrants –“Immigrant Stories Told at the New Americans Museum”- and his stories on Jewish Family Service and how they have served the community for over 100 years-“JFS, Looking Back a Century, Recalls Rose Neumann”. Moreover, I liked his stories on people who converted and intermarried couples- “Christina de Jesus is a Jewish Song Leader” and “Intermarried Couple Honors Each Other’s Beliefs."  His curious nature has served him well in life. 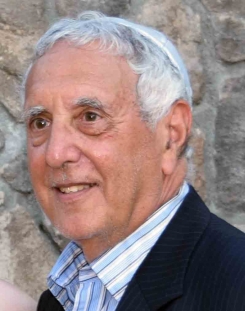 There are also many stories related to the history of San Diego, such as “Plaque Recalling First Roseville Hotel Unveiled."
Since San Diego has a strong military presence, there are two chapters I liked touching on that: “Liberation Moment at Miramar National Cemetery Honors Ex-POW’s” and “Jews of the US Military Honored at Veteran’s Museum."
One of his best received articles is the one on the passing of San Diego’s First Lady of Holocaust Survivors, Gussie Zaks- “Community Says Goodbye to Gussie Zaks”. Her funeral service was held at the Tifereth Israel Synagogue in San Carlos. It is his tribute to her and the community that loved her, and it struck a chord with many readers.
In another chapter, Harrison describes how two ancient traditions- Kumeyay and Jewish- were briefly juxtaposed at Chabad of East County.
Finally, there are also several chapters about his adventures sightseeing in San Diego from the coast to East County as well as points north and south which he describes with gusto. I liked his chapters on Seal Tours, Living with Animals, The Model Railroad Museum in Balboa Park, and Birch Aquarium. In addition, every year he goes to Comic-Con with engaging observations. Check out “Survivor Ruth G. Saks Impresses Comic Con Audience”.
The motto of his publication, San Diego Jewish World, a daily online newspaper, is “There is a Jewish Story Everywhere” and Harrison sure knows how to find them.