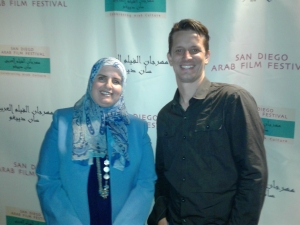 The 2017 San Diego Arab Film Festival saw a 40 percent increase in attendance over 2016, with over a thousand people attending throughout the two weekends. The first weekend was at the Museum of Photographic Arts and the second weekend was at the AMC 20 in Fashion Valley.

“I thought it was just going to be my friends and family,” said Director Andy Trimlett of the sold out theatre of 300+ people for the sneak peak of his film 1948: Creation and Catastrophe.

“It tells the story of the establishment of Israel as seen through the eyes of the people who lived it. It is simply not possible to make sense of what is happening in the Israeli-Palestinian conflict today without an understanding of 1948,” explains the film’s webpage.

The film’s second director, Professor Ahlam Muhtaseb, Ph.D., also pictured, told East County Magazine “I think at this point all I want is for as many average Americans as possible to watch the film. It’s the condensing of 10 years of hard labor.”

1948: Creation and Catastrophe captured the accounts of Palestinians and Israelis present during the establishment of Israel, as well as interviews with historians “to provide context for the events.”

This was an early showing of the film. To be a part of the worldwide film screening March 31 of 1948: Creation and Catastrophe visit www.1948movie.com/

Most of the films were set in the Arab world. Tour de France, Fireflies and Here You Are depicted the experience of Arabs in western countries. 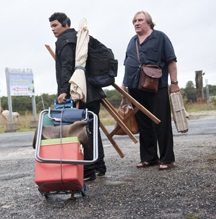 Tour de France was a full-length film set in France, about a French Arab rapper Far’Hook and an old white man Serge’s journey to paint all the ports in France. The ending is very satisfying, with the villain meeting a very embarrassing fate and Far’Hook rapping about his eventual comradery with Serge and racial equality.

Fireflies was one of the shorts, and one of the favorites of my friend who attended the festival with me. It follows a man in Boston who lost his wife and daughter on a boat escaping from a war zone. When he leaves his backpack unattended to use the restroom the restaurant evacuates, thinking there is a bomb in a backpack. Instead it is filled with items that help him remember his family. This RA Vision Productions short without dialogue was a winner at the Roxbury International Film Festival and the U.K. Film Review called it “painfully relevant.” You can watch the preview at http://www.ravision.net/fireflies.html

My two favorite shorts were One Minute and Under the Robes.

One Minute chronicles one night of bombing of the Shujaiya neighborhood in Palestine. I couldn’t help but cringe as bombs dropped, while Salma comforts her crying baby. It may be especially difficult on viewers who have witnessed bombing first-hand. One Minute has won multiple awards from various festivals and organizations. You can watch the trailer on YouTube.

Under the Robes is a 20 minute comedy about a group of nuns visited by the Monsignor who has come to announce their convent is being sold. Before he is able to tell them the news, he inadvertently steps on a landmine from old war times. The short chronicles the efforts of the nuns to disable the landmine or at least keep the Monsignor from moving which would set off the land mine. It is the graduate project of Michel Zarazir.

Ali, the Goat and Ibrahim is also very funny and also suspenseful. It is a good movie on the surface but can also be analyzed for those wishing to take the dive. Ali is in love with a goat which he thinks is the reincarnation of his dead fiancé. Ibrahim is a successful music producer and instrumentalist but eventually loses his job because he is occasionally tortured by a loud ringing in his ears. The two of them, along with the goat, set off on an adventure of healing which is funny, suspenseful, and to my amazement was able to work out a very happy ending. You can watch the trailer on YouTube.

Professor of Philosophy at City College and Arab Film Festival Committee member Najah Abdelkader introduced Ali, the Goat and Ibrahim as the story of people trying to live their lives for the best amidst all the troubles that come along with life and living in the slums.

I believe it is a comedy about mental illness, with one main character that has delusions and another main character that has schizophrenia, but that is certainly debatable. Ali believes his dead fiancé’s soul is in a goat. He is vindicated in the end, but in the real world that would be a delusion. Ibrahim is fired because his boss doesn’t want a crazy person in his studio, as he hears this loud ringing in his ears. The connection to its addressing mental illness is subtle, but strong. Both men are tortured and travel to three seas to cast three stones that the doctor says will cure them.

It starts out fast with a harrowing rescue of a girl being gang raped in the second scene, and their adventure throughout and the slow but steady filling in on the background of why Ali is in love with a goat and he and Ibrahim’s quest for healing and adventure all the way up until the very happy ending.