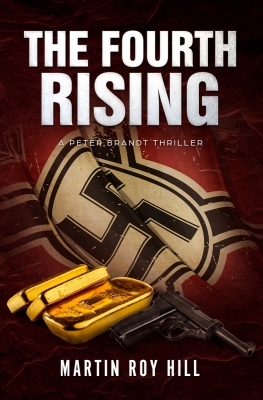 January 4, 2021 (San Diego) -- Martin Roy Hill's latest Peter Brandt thriller, The Fourth Rising, has been named 2020 Best Mystery by the Best Independent Book Awards. The Fourth Rising is the third entry in Hill's series about a former war correspondent who is scarred physically and emotionally by the violence he's witnessed. It was published in May 2020 by 32-32 North, an independent book publisher.

"I am pleased and thrilled and honored to receive this award," Hill said.

The Best Independent Book Award contest is an international literary competition open to all writers who work in the English language.

Inspiration for The Fourth Rising came from the work of researchers who claim that while Germany surrendered at the end of WWII, the Nazi Party did not. Instead, important members were sent to other countries to quietly rebuild the party and further the Nazi quest for world domination, this time through economic means rather than war.

In The Fourth Rising, former war-correspondent Peter Brandt's investigation into the murder of an ex-lover's husband leads him on a hunt for hidden Nazi gold that uncovers a generational plot to bring back the Nazi Party and a new Fourth Reich.

Hill says the post-war survival of the Nazis is not entirely a new idea. Novelist Frederick Forsyth explored the subject in his thriller, The Odessa File, as does Amazon's TV drama, "The Hunters." However, Publisher's Weekly said of The Fourth Rising, "Hill injects suspense and plausibility into a familiar plot—the existence of a covert movement aimed at restoring the Nazi Reich...Hill nicely balances action and exposition. Readers new to this author will want to check out his other books."

The Fourth Rising is Hill's ninth book. Besides his Peter Brandt series, he is the author of two thrillers featuring NCIS Special Agent Linus Schag, two stand-alone military sci-fi novels, an award-winning collection of short stories, and a book of military history.