March 14, 2011 (San Diego) – The U.S. S. Ronald Reagan, an aircraft carrier based out of San Diego, has repositioned after detecting radioactive fallout from the Fukushima Dai-Ichi nuclear power plant in Japan that has undergone a partial meltdown. According to Captain Thom Burke, commanding officer, all personnel aboard are “safe and healthy.”

The ship has been deployed to assist in relief efforts following the devastating earthquake and tsunami, which has left an estimated 10,000 dead and many more missing in Japan.

The vessel was about 100 miles from the nuclear plant when the radiation was detected and the ship was pulled back to a safer area.

Radioactivity was detected on 17 personnel, but Capt. Burke assures, “ We promptly took the property precautions and the radioactivity was easily removed by using soap and water.” 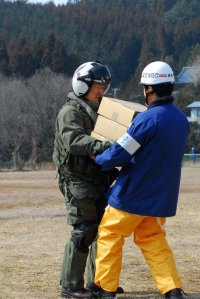 “The levels that were detected were very low levels,” Burke posted on the ship’s Facebook page. “To put this into perspective, the maximum radiation dose received was equal to the amount of natural background radiation one would receive in one month from sources such as rocks, soil and the sun.”

He added that spaces on the ship are being closely monitored, all personnel who have flown or worked on the flight deck have been evaluated, and aircraft have been cleaned, “As a nuclear-powered aircraft carrrier, we have extensive technical expertise onboard to properly monitor such types of risks, and if necessary, rapidly resolve the situation,” he concluded. “I have not seen any levels of radiation or contamination that would cause me to have any significant concerns at all.”

Three nuclear reactors at Fukushima continue to have serious problems, with partial melt-downs confirmed at two and a hydrogen explosion last night at Fukushima’s reactor number three.
Relief supplies are desperately needed in Japan, where millions are without adequate food, water, and other supplies.

This radiation is getting to our nerves... I hope it will not result to any further damage.
_______
Having problems with your health? I got some solutions about:
iphone 4 case, jon gabriel method and shakti mat