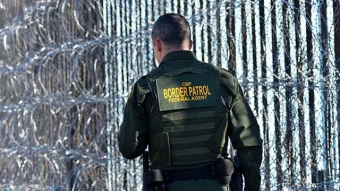 January 9, 2019 (San Diego) - Albert Vieira, working as a border officer in San Diego, hasn’t been paid since the partial government shutdown began Dec. 22. Now he’s the named plaintiff in a major lawsuit against the federal government.

Lawyers for him and thousands of others are suing the feds for unpaid minimum wage and overtime — plus matching damages.

Vieira, represented by the National Treasury Employees Union, is an “excepted employee” being forced to work without pay. The collective action is on behalf of 150,000 employees at 33 federal agencies and departments.

Filed Monday in the Washington-based U.S. Court of Federal Claims, the 15-page complaint alleges the administration is violating the Fair Labor Standards Act by requiring federal employees to work without pay.

“It is unconscionable that many employees are having to work – and in some cases overtime – with no pay whatsoever,” NTEU President Tony Reardon said in a statement. “These civil servants took an oath to the Constitution and they do not deserve to be treated this way.”

According to the complaint, Vieira is normally assigned to Oakland. But on Nov. 25, he was deployed by Customs and Border Protection to San Ysidro and Otay Mesa in a duty set to last until Jan. 13.

“The FLSA guarantees, for employees falling within its coverage, the on-time payment of any minimum wage and overtime wages earned,” the suit says. “If those wages are earned, but not paid out, on the employee’s corresponding regularly scheduled payday, the FLSA has been violated.”

Vieira’s attorneys — led by NTEU general counsel Gregory O’Duden — say that the federal government has previously been held to be liable for liquidated damages stemming from its failure to timely pay FLSA wages to FLSA nonexempt employees during a government shutdown.

The lawsuit says Vieira’s overtime pay, as well as matching liquidated damages, may be paid from the Judgment Fund, a permanent appropriation for the payment of judgments and compromises.

“It is not subject to the annual appropriations process and it is not implicated by the current shutdown,” his lawyers said.

This is not the first shut down nor will it be the last. If Albert Vieira does not understand that or the American system, he can move to Mexico and get a job on the other side of the fence.