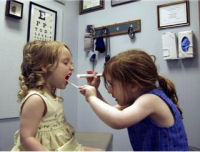 New Study Reveals Obesity Rate Drops: “Live Well” program credited with positive results
November 11, 2011 (San Diego) -- It appears San Diego County children and adolescents are putting down the sodas and Twinkies and becoming more physically active.
A new study conducted by the California Center for Public Health Advocacy (CCPHA) revealed that the obesity rate among local children dropped by nearly four percent.
“This is great news,” said Vice-Chairman Ron Roberts, County Board of Supervisors. “The study shows we are a leader in California. After spending 10 years working to curb childhood obesity, I am delighted to see the pendulum swinging in a positive direction.”
The CCPHA study compared collective obesity rates among 5th, 7th, and 9th graders between 2005 and 2010. The report used data from the California Physical Fitness Test (also called Fitnessgram, which measures height and weight data to calculate body mass index, the statistic used to determine rates of obesity.)
Last year, the childhood obesity rate in San Diego County was 34.5 percent, down from 35.83 percent in 2005, a 3.7 overall percent change. The County ranked lower than both the statewide average of 38 percent and the southern California average of 38.78 percent. Overall, 26 California counties, including San Diego, saw a decrease in obesity rates.
“The County’s aggressive efforts in obesity prevention are producing positive results,” said Supervisor Pam Slater-Price, who chairs the Leadership Team for the Healthy Works campaign, a component of the County’s Live Well, San Diego! initiative. “We are determined to make the necessary changes which will give our County residents better access to healthy choices.”
Launched by the County Health and Human Services Agency (HHSA) one year ago, Live Well, San Diego! is a 10-year plan to improve the health and wellbeing of the region. This plan was built in part off of the successes of the Childhood Obesity Initiative spearheaded by Supervisor Roberts and Supervisor Slater-Price.
“We provide residents the opportunities and the environment to be healthy,” said Nick Macchione, HHSA Director. “We know a healthier San Diego County is within reach, and the results of this obesity study support our belief.”
Poor diet, lack of physical activity, and smoking are three behaviors that contribute to the four chronic diseases—heart disease, type 2 diabetes, lung disease and cancer— that are responsible for more than 50 percent of deaths in San Diego County.
“These diseases can be prevented. Sometimes a few lifestyle changes can make the difference,” said Wilma Wooten, M.D., M.P.H, County Public Health Officer. “We have a long way to go, but it’s encouraging that we are starting to move the scales in the right direction.”
To view the California Center for Public Health Advocacy report on childhood obesity visit:http://www.publichealthadvocacy.org/research_patchworkprogress.html