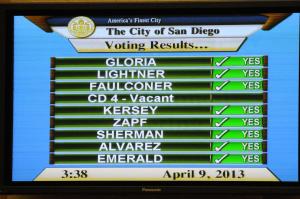 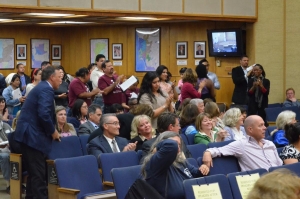 April 9, 2013 (San Diego)—At the cusp of the U.S. Senate taking on immigration reform, the San Diego City Council today sent a bipartisan message to Washington. With a unanimous vote, the San Diego City Council passed a resolution asking for comprehensive, common sense, immigration reform. The partisan divide in Washington was not evident in San Diego, where Republicans joined their Democratic colleagues to stand united on this issue.

Council Member David Alvarez chaired the effort with Council Member Mark Kersey.  Before the vote, Alvarez said, “The language is meant to send a message to Washington DC...This is a united message.” He noted that almost everybody is affected by this issue; immigration touches all of us.

Many turned out to speak in favor of the measure; not a single person spoke against it. 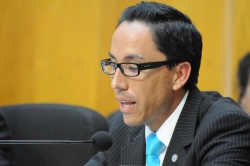 Council President Todd Gloria also told the audience that he has been getting calls from around the nation. This resolution is seen as a template for municipalities across the U.S.

Before the vote was taken, members of the community and several organizations spoke to urge the City Council to adopt this resolution. Mark Dylan urged the Council to vote for it, and provide that voice to Washington, that little grain of sand, that would help the 113th Congress to make this decision.

Pedro Rios, Chair of the Immigrant Rights Committee, reminded the Council that, on average, we see 1,000 deportations a day. San Diego is known as a place for those deportations to happen. This separates people and families. He also said that “people who end up in shelters in Tijuana have lived in the United States.” He sees this as a human rights issue.

He commended the Council “for adding your voice to the thousands of voices that have risen.”

Richard Ramirez spoke of a not long ago past, when immigrants had to pound on doors. “We are waiting for federal officials to act, and they are looking at local officials for leadership.”

Benjamin Prado of the American Friends Committee (which works with refugee issues and immigrant issues) thanked Alvarez for his bold leadership. He also mentioned the San Diego Nine (hotel workers staging a hunger strike) as an example of how our broken immigration system leads to tragedies. This Council Resolution, he said, “is history.” He added, that he was very aware, that “this is coming ahead of the immigration bills” in Washington D.C.

Others present, such as Humayra Yusfi, who immigrated from Afghanistan, reminded the Council that this was not just a Latino issue. She also represented the American Civil Liberties Union. She was emphatic. “I’d like to convey our support for comprehensive immigration reform.”

Andy Pacificar of the I Love Movement, spoke of Cambodian Refugees, who now face deportation for minor crimes committed decades ago.  He mentioned Sofia Hann, who was deported for a fisticuffs when he was in High School, over twenty years ago. 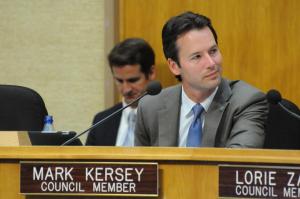 Council Member Kersey spoke before the vote. “I want to thank my colleagues, especially my Republican Colleagues. We need comprehensive, reasonable immigration reform.”

He added, that we do need a pathway to citizenship, family reunification, and visa reform and that while he has heard good things from the “Gang of Eight” in the Senate, immigration reform backers need to put pressure. He added that he has always been a supporter of reform.

Kersey was also touched by the testimony of a young Dreamer, who told her story of finding roadblocks to get college scholarships. He added that the “visa system is broken, 40% are expired visas. This does not provide talent for San Diego companies.”

Kevin Faulconer said that last week the U-T San Diego reported that H1B visas, which are not immigrant visas, were filled up already.

Sherri Leightner said that she was voting for this with reservations. She worried that “American workers are hired without artificially compressed pay scales.”  She added, “I hope that Congress will listen.”

Scott Sherman said that he was voting for this, but that this “is not the function of city government.” He also worried that this would promptly go to the trash in DC.

Marti Emerald echoed the rest of the Council, “if we can come together in san Diego, this sends a strong message to Washington. It is not us versus them.”

Finally Lorie Zapf went into her own family’s immigrant experience. This is why she could understand this. She said, “Our immigration system is broken. Families are split.” She also echoed Faulconer “a lot of San Diego companies use H1B Visas. If STEM (Science, Technology, Engineering and Mathematics) was super successful we would not need those visas.”

When the vote was taken, there was a standing ovation in the room.

Mayor Filner, after the vote, told ECM that “he hopes this has an effect in Washington,” and that “I am glad they did it.”