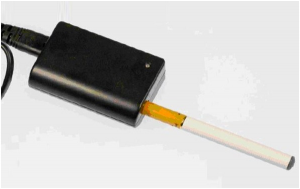 If signed into law, the ordinance will require store owners to get a permit from police for selling e-cigarettes. You won’t be able to buy e-cigarettes, vaping devices or related paraphernalia through vending machines.

E-cigarettes, also known as vapor inhalers, will be banned in restaurants, sports arenas, theaters, parks and other public places where smoking tobacco products is already banned.  Vaping will also be prohibited in daycare centers, including daycare facilities in private residences.