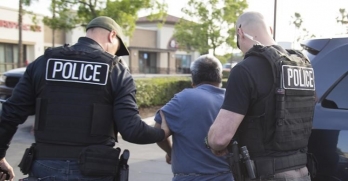 May 16, 2018 (San Diego) – San Diego’s City Council has voted to join cities and states filing an amicus brief to support California’s sanctuary state laws against a lawsuit filed by the Trump administration. The Council’s action is the polar opposite of County Supervisors, who voted to support the federal lawsuit against our state.

The City Council’s 5 to 2 vote came in close session on Tuesday, with Councilmembers Lorie Zapf and Mark Kersey casting the only no votes. Councilmembers Chris Cate and Scott Sherman were absent.

Supervisors, by contrast, voted 3 to 1 to support the suit, with only Supervisor Greg Cox voting no and Supervisor Ron Roberts away.

The Sanctuary State laws are designed to protect many undocumented immigrants from deportation by limiting cooperation between state and local law enforcement agencies and federal Immigration and Customs Enforcement, or ICE, officers. They also limit federal immigration officials from entering workplaces without a warrant and give California’s attorney general the right to inspect immigration detention facilities.

Opponents of the sanctuary state laws contend that one of those laws, SB 54 protects criminals and could increase crime.

San Diego Mayor Kevin Faulconer issued a statement indicating, “San Diego is not a sanctuary city. I oppose the vote to join an amicus brief in the lawsuit over California's sanctuary state laws. San Diego is one of the safest big cities in the country, with public safety policies that have worked under both Republican and Democratic administrations,” the Mayor posted on Twitter, adding, “We have no plans to change them.”

However, Sheriff Bill Gore has said the final version of the law passed by the Legislature allows his department to notify ICE officials before releasing prisoners who have been convicted of any of 800 serious crimes, or even if they have merely been arrested provided they have had a hearing before a judge.

The Sheriff has also said law enforcement officials don’t want immigrants to be afraid to talk with police or sheriff officers to report crimes if they are witnesses or victims, and that he negotiated with Governor Brown and the Legislature to have some language removed from the bill to assure that his department can still coordinate with federal officials on matters such as terrorism.

"We thank the council members for their leadership in protecting our immigrant communities,” said Norma Chavez-Peterson, executive director of the ACLU of San Diego and Imperial Counties.  She added, "California is fully within its rights helping to keep families together, defending Californians' constitutionally-protected due process rights, and protecting Californians from racial profiling and other injustices."

Will evangelicals come out for Trump's Republican party in November?
https://www.theguardian.com/us-news/2018/may/19/donald-trump-white-evang....

Then come on this site and berate ECM

Why did you try to make it appear as if he meant everyone? MS-13 Gang members are young and will not blink twice in cutting a head foot or just taking a machete and chopping a person up. This is what President Trump was speaking about. When chatter like the previous poster was trying to twist along with other news articles was about everyone. This umbrella context link or otherwise is what makes fake news standout for the desperate that lost an election and still to this day cannot get over it? It's really sad and I hope kids don't get the Idea Lying is an OK adult thing. sic

You are arguing with people who will not acknowledge fact unless the new york times tell them too. It is a mental health issue , they have been conditioned to react to the President's actions in a negative way. Very sad to see, but often ageing accelerates mental deterioration. That may explain some prolific commenters

You will notice or not in the national news roundup nothing about the .resigned new york attorney general a DEMOCRAT who beat women
https://www.newyorker.com/news/news-desk/four-women-accuse-new-yorks-att...
https://www.nytimes.com/2018/05/07/nyregion/new-york-attorney-general-er...
https://www.washingtonpost.com/news/post-nation/wp/2018/05/07/four-women...
https://www.theatlantic.com/politics/archive/2018/05/the-stunning-speed-...

We can't cover every story in the nation.  The NY attorney general is a NY state issue. We don't cover issues local to other states.  We do however cover scandals involving anyone people locally might actually vote for, whether they are Dems or Reps, as our coverage through the years shows.  Recently for instance we've covered lawsuits and ethical issues involving Democratic councilmembers in Lemon Grove and El Cajon, just in the past month or two, as well as stolen valor allegations involving a Republican Assemblyman, to cite a few examples. Ethics are ethics, and we don't shy away from covering anyone based on their party affiliation.

On the judge in the Mueller case, we linked to a story on that in a recent World Watch.

I always wonder why most never obtained citizenship? I guess its the gift that keeps on giving, right into adult parenthood? It's hard to give up a free ride. I know Americans that would love to have there kids get into collage but can't .

to become citizens. They have no path to do so, unless they marry a citizen.  That's why so many are calling for comprehensive immigratoin reform.  You can only become a citizen seven years after coming here LEGALLY.  For the rest, there's no choice but to remain in the shadows, or leave.

I Do Not condone illegal immigration, but... the DACA situation is a different story. These children Did Not come here on their own, they were brought into the U.S. by their parents, and many now have children of their own, plus jobs, etc. FACTCHECK.ORG is a solid website for researching the truth, specifically: https://www.factcheck.org/2018/01/daca-population-numbers & https://www.factcheck.org/2009/04/cost-of-illegal-immigrants.
Once the USSC receives gets this its over for DACA. When will politicians and people in general figure out that when you reward illegal immigration with jobs, drivers licenses, discounts in college tuition, scholarships encourages illegal entry. DACA recipients care about one thing, themselves. They have used billions of taxpayer dollars and want more and more. There is an estimated 800,000 DACA recipients in the US. That is 800,000 jobs American Citizens don't have or will be in competition for. So when you hear "we pay taxes...we pay taxes" about "contributions" by illegal aliens taking American jobs, remember that also is at a cost in jobs citizens should have. Just some of the costs associated with illegal immigration, we will pass this burden on to our children as has been passed on to us. *The cost of educating illegal aliens children is staggering. From K-12 it costs taxpayers $122,000 for EACH illegal alien student. This does not include the billions spent on bilingual education for illegal aliens. *Currently city, and state officials are appropriating millions of taxpayer dollars for legal fees to to file law suits and in defense of illegal aliens being deported. *2012 illegal aliens sent home $62 BILLION in remittances back to their countries of origin. This is why Mexico is getting involved in our politics. *30% percent of all Federal Prison inmates are illegal aliens.Does not include local jails and State Prisons. At $21,000 per year expense per inmate in Federal Prison U do the math. *$3Million Dollars a DAY is spent to incarcerate illegal aliens, I repeat 3 MILLION a DAY to process Illegals in the Criminal justice system. *$2.2Billion dollars a year is spent on is spent on food assistance programs such as SNAP (food stamps) WIC, & free school lunches.All can be found on google. The CBO (congressional budget off ice) estimates it will cost American taxpayers 26 billion over the next 10years if 1.8 million re legalized. http://www.illegalaliencrimereport.com/category/murder/ https://www.newsmax.com/.../uscis.../2018/01/22/id/838627/
Nuff said....Maybe the Alpine historical society should follow that...