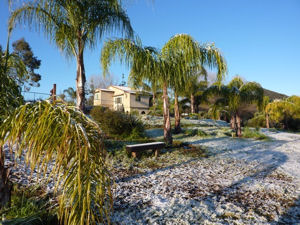 January 1, 2012 (San Diego County) -- The National Weather Service has provided the following reflections on local weather highlights for the past year--which included some wet and wild times.

After weathering the great storms of December 2010, January 2011 decided to start off more La Niña like. Only 13% of normal rainfall fell in San Diego that month, coming from two small storms at the beginning and the end of the month. The presence of a high pressure ridge most of the month pushed temperatures a few degrees above average. On 17 January, warm offshore flow produced temperatures in the 80s across the region and Riverside even managed to touch 90 degrees.

The dry weather continued in February, with episodes of dry offshore flow. On the 2nd and 3rd, offshore winds near Riverside of 65 mph blew down a tree on part of a building. Winds near Ontario caused five trucks to over- turn. During the middle of the month, the persistent high pressure ridge moved aside to allow a broad trough to de- velop and let the storms in for two weeks. San Diego received their normal February allotment during these two weeks, but Orange County only got about half of the normal. Some flooding resulted on the 19th and 20th. A colder storm brought heavy snow to the mountains and even accumulated down to 1000 feet elevation on the 25th and 26th. Amounts were 24.5 inches in Wrightwood, 24 inches in Forest Falls, 23 in Mt. Laguna, 21 in Lake Arrowhead, 20.75 inches in Pine Cove, 16 in Palomar Mountain, and 15 in Idyllwild. About a half inch accumulated in Jamul and Ramona. 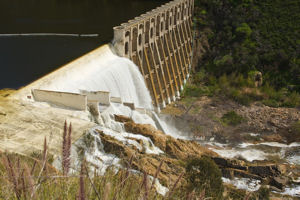 Like February, the first half of March was nearly dry, but the second half turned wet. On the 19th through the 21st a powerful winter storm system brought very strong winds, moderate rain, and heavy snow with blizzard conditions in the mountains. Many areas experienced wind gusts to around 50 mph for a time on the 20th, but the strongest winds by far occurred over the high desert areas adjacent to the San Bernardino Mountains, with gusts exceeding 110 mph at Burns Canyon. Considerable wind damage was reported in the Apple Valley and adjacent foothill areas. Snowfall amounts were 28 inches in Wrightwood, 20 in Running Springs, and 15 inches in Big Bear City. On the 21st, a waterspout was observed from an airplane four miles north- west of San Diego.
April was not too eventful except for a very cold, late season storm system that brought a wintery mix of weather and strong winds from the 7th to the 9th. Westerly wind gusts topped 60 mph in ad- vance of the storm east of the mountain crests. Deep instability generated periods of showers and thunderstorms that resulted in highly variable precipitation totals, but generally west of the moun- tains, 0.25 to one inch fell. Snow fell down to around 2500 feet, with most populated areas in the mountains reporting between three and six inches, but with larger amounts above 6000 feet in the San Bernardino Mountains.
May got off to a dry and mild start under high pressure aloft, but by the second week, a cold low pressure trough sagged south over the region bringing below normal temperatures, a deep marine layer and light precipitation west of the mountains. The trough pattern continued for almost the rest of the month with several late season storm systems that brought light to moderate precipitation, strong winds and below normal temperatures.
A persistent trough pattern along the west coast kept the marine layer deep and the weather on the cool side through much of June. The trough gave way to ridging after the 20th, which decreased the marine layer and warmed areas inland. A broad high pressure ridge remained in place over the south- ern tier of states through the end of the month. On the 16th strong winds hit the Coachella Valley. Blowing dust and sand on Hwy. 86 reduced visibility to near zero, and led to an eight car accident in Coachella with several injuries.
The subtropical high pressure ridge set up near the four corners area of the southwest in early July, resulting in very warm to hot conditions, and an 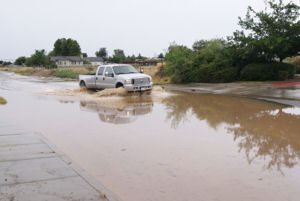 open door for monsoonal moisture to invade the region. Intense thunderstorms occurred on the 6th, when a few severe storms roamed the Inland Empire with strong winds and hail. Flash flooding was observed near Wrightwood, Phelan, and in the Whitewater River wash. After several days of thunderstorms over the mountains and deserts, a low pressure trough developed along the west coast, bringing quiet and seasonably cool conditions. Another monsoon push arrived on the 29th, which brought numerous showers and thunderstorms through the end of the month.
Like July, August oscillated between monsoon surges with strong high pressure over the southwest, and a dry weak trough pattern. Two monsoon episodes produced notable thunderstorm outbreaks early and late in the month. On the 1st and 2nd, thunderstorms developed each afternoon in the mountains and drifted into the high desert. Flash flooding was observed near Johnson Valley on Route 247, as well as in Victorville and Wrightwood. On the 24th, Palm Springs hit 117 degrees, the highest temperature in our region this year. On the 26th through the 28th a surge of monsoonal moisture brought three days of significant thunderstorms. 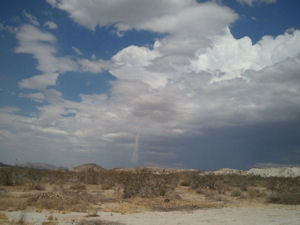 These storms brought lightning, strong wind gusts, 0.50 to 0.75 inch hail and brief heavy downpours. The rain produced some flash flooding at low water crossings in Chihuahua Valley. Street flooding was also reported in Big Bear City where Big Bear Blvd had water six to 12 inches deep. On the 28th a thunderstorm in Campo produced mi- croburst winds measured at 65 mph and 61 mph by two separate stations. Five power poles snapped and several large tree branches were downed. Lightning sparked several small fires.
September brought several episodes of monsoon and subtropical moisture. On the 5th it rained in San Diego on Labor Day for the first time since 1965 and brought about a quarter inch of rainfall west of the 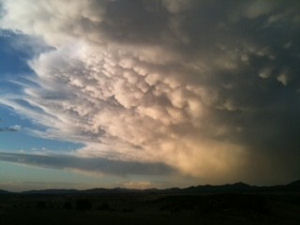 mountains while thunderstorms struck the mountains and deserts. A remarkable heat burst hit the coastal areas on the 6th. Shortly following some tropi- cal showers, temperatures soared to 100+ degrees at many coastal stations. On the 10th, an upper low pres- sure system just off the coast supplied sufficient mois- ture and instability to bring scattered elevated thunder- storms to Orange County as well as the mountains and deserts of San Bernardino County.
Reports of 1 inch hail came from Anaheim, Costa Mesa and Dana Point, all falling through marine layer low clouds. Heavy rain caused flash flooding in San Bernardino County along Highway 18 near Apple Valley, which was closed due to one to two feet of water in the roadway, stranding multiple, stalled vehicles. On the 13th, another monsoon surge brought strong thunderstorms over the mountains and the Coachella Valley. In the north- ern San Diego County Mountains, heavy rain led to flash flooding with debris flows. Hail up to 0.75 inch was reported at Big Bear City and Highland and a funnel cloud was observed near Perris. On the 23rd, isolated thunderstorms hit the San Diego county valleys and mountains. Gusts to 45 mph, lo- cally heavy rain, and lightning strikes occurred along I-15. Hail of 0.25 inch was reported in El Cajon.
October began dry with the Great Fire burning 2,135 acres near Shelter Valley. A cold front moved through the region from the 4th to the 6th, 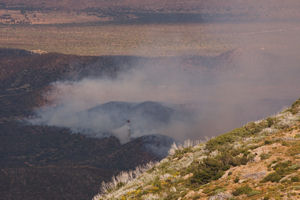 bringing 3 days of rain along with gusty winds. Rainfall amounts over this three-day period were substantial, but non-flooding, providing areas west of the mountains with 0.75 to 1.5 inches of rain and mountain areas 1 to 2+ inches. Tem- peratures also fell to around 15-25 degrees below aver- age. High pressure returned by the 11th and stuck around for a good portion of the month. It finally broke down by the last week of the month as a short wave ro- tated around an upper low to the north and through southern California, bringing very light rain amounts to a few areas west of the mountains. Overall the fall fire season was very well-behaved.
November was a month marked by rain-soaked frontal systems moving through the region approxi- mately every seven to eight days. On the 2nd, a strong offshore wind produced gusts of 81 mph at Fremont Canyon. On the 4th through the 6th a strong low pressure system brought three days of rainfall along with gusty winds. Amounts were one to two inches, but no significant flooding resulted. Two to six inches of snow fell above 4000 feet. Cold, unstable air behind the front set off scattered thunderstorms. The storms near the Banning Pass had accumulations of several inches of pea-sized hail. On the 12th and 13th another strong cold front brought 0.25 to 0.50 inch of rain, and one to two inches over the vast majority of San Diego County, even spilling over into the deserts. Only minor urban-type flooding occurred. On the 20th and 21st a third cold front moved through the region, bringing one to two inches of rain and three to six inches of mountain snow above 6000 feet, but no significant flooding was observed.
December was dry except for a one week period right in the middle of the month. A strong offshore wind event hit on the 1st, with gusts in San 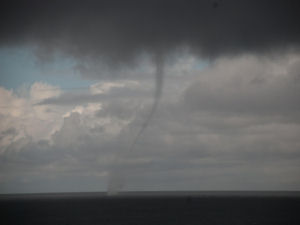 Bernardino reaching 70 mph. A few trucks were overturned on I-15 and I-210 and power lines were downed. But an isolated heavy snowstorm also struck the Big Bear area, dumping 12 to 18 inches of snow on the 1st and 2nd. Almost no snow fell anywhere else. On the 6th, Big Bear City Shea Meadows hit the region’s lowest temperature of the year at minus 1 degree F. From the 12th to the 19th, several cutoff low pressure systems brought rain, mountain snow and gusty winds. On the 12th, as many as five waterspouts were observed off La Jolla: three off Windandsea Beach, and possibly two others off La Jolla Shores. On the 22nd yet another offshore wind event produced gusts exceeding 70 mph across the Santa Ana Mountains.
The very wet week in December of 2010 skewed the rainfall amounts for the 2010-11 winter and contributed greatly to the above normal rainfall for that season which ended in June. The long California drought was declared over in March. All other months in 2011 except for November ended up near or below normal, so the calendar year rainfall of 2011 ended up below normal (see following charts).
A moderate La Niña was prevalent during the winter of 2010-11 and the same is happening this win- ter. Both wet seasons reflected above normal fall rainfall: this year in November and last year in December. Lower than normal rainfall occurred for the rest of the wet season for January through March of 2011, and we will have to wait and see how the rest of the wet season in 2012 ends up. 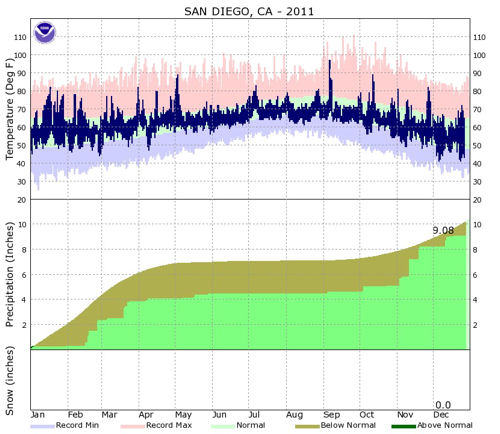