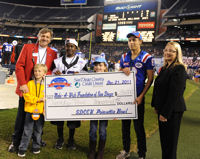 The eighth annual San Diego County Credit Union Poinsettia Bowl in 2012 will match a Mountain West Conference team against Brigham Young University if BYU is bowl-eligible with at least six wins, according to the San Diego Bowl Game Association, the non-profit entity that produces the game at Qualcomm Stadium.

Mountain West champion Texas Christian University Horned Frogs of Ft. Worth, Tex. needed a fourth-quarter comeback for a 31-24 victory against the Western Athletic Conference champion Louisiana Tech University Bulldogs of Ruston, La. in the 2011 San Diego County Credit Union Poinsettia Bowl. TCU quarterback Casey Pachall threw a 42-yard touchdown pass to Skye Dawson with 4:25 left for the go-ahead winning play. It was the nation’s only game among the 35 post-season college football games to have a credit union as the title sponsor. It was the Frogs’ third appearance and victory in the San Diego County Credit Union Poinsettia Bowl, which began in 2005. SDCCU has served as the title sponsor since the bowl game’s inception.
“It was an exciting, hard-fought, close game with several lead changes between the two conference champions,” said Teresa Halleck, SDCCU president/CEO. “All of us at SDCCU were gratified that the game also was able to provide hope, strength and joy to children through the Make-A-Wish Foundation.”
The San Diego County Credit Union Poinsettia Bowl was the first college bowl game to establish a charity beneficiary. Since the bowl game’s founding, $1 from every admission ticket sold has gone directly to the San Diego chapter of the Make-A-Wish Foundation, allowing the charity to grant wishes to children with life-threatening medical conditions. The 2011game, played on Dec. 21, generated a donation of $25,000 to the Make-A-Wish Foundation. The partnership between SDCCU, Make-A-Wish and the Poinsettia Bowl, in effect since the bowl game’s inception, has resulted in more than 44 wishes granted to children in San Diego.