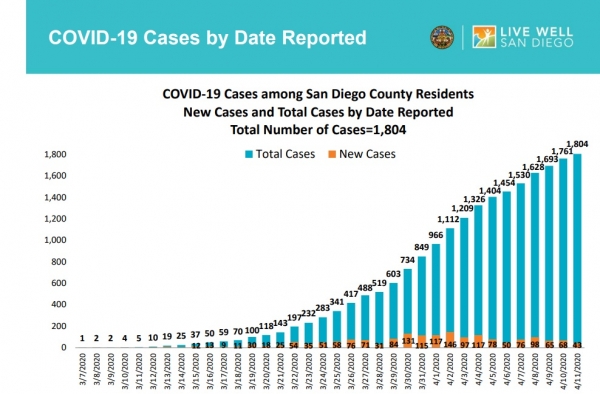 By Chris Jennewein, Times of San Diego, a member of the San Diego Online News Association
Photo (pay special attention to new cases in orange) Prepared by County of San Diego, Emergency Operations Center, 4/12/2020. Data are preliminary and subject to change
April 12, 2020 (San Diego) -- San Diego County health officials on Saturday reported progress in flattening the curve of new coronavirus cases but urged residents not to get impatient to return to normal life.
Supervisor Nathan Fletcher reported 68 more cases for a total of 1,761 and one more death — a man in his early 80s — for a total of 45.
If the number of coronavirus cases in the county continued to increase at Saturday’s rate of just under 4%, they would double after 18 days.
“What we are seeing in San Diego County is progress. We have flattened the curve in San Diego County relative to places like Italy, China or New York,” said Supervisor Nathan Fletcher at the county’s daily briefing.
“But it would be the greatest shame to throw away all of that progress and to waste all of that sacrifice because we got impatient,” he said.
Fletcher said relaxing current restrictions will require the widespread, rapid testing throughout the county. Scripps Health recently began using a new test system from Abbot that delivers results within 15 minutes, and other testing resources are ramping up.
A total of 24,430 tests have been administered in the county since the pandemic began. “Our county is going to continue to increase our focus on testing,” Fletcher said.
Dr. Wilma Wooten said San Diego’s efforts to flatten the curve have helped avoid an overwhelming surge at local hospitals, which she said continue to have capacity to treat new patients.
“We are seeing what we hoped would happen,” she said, and thanked San Diegans for following the social distancing guidelines.
Supervisor Greg Cox announced a new awareness campaign so that the public can submit photos of themselves holding a sign, such as “stay in place, maintain space and cover your face” that can be shared on social media. The website for more on the awareness campaign is livewellsd.org/psa.
“Let’s spread the word, not the virus,” Cox said.

Less than one percent of SD County population has been tested for COVID-19, with 1/20 of one percent (1,804) as "positive cases." There have been 45 deaths due to Coronavirus. . . . Compare this data to Influenza/pneumonia -- 105 deaths this season due to Influenza Types A (mostly) and B, with 20,591 cases. . here. . .But the two afflictions have different seasons. The flu/pneumonia season started earlier and is about over, while the Covid-19 "season" is ongoing.