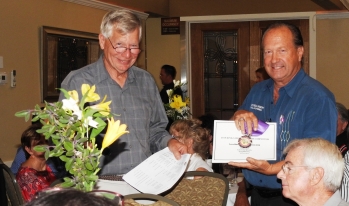 An expanded group of judges of three panels-of-four rated an all-time high number of 114 entries of red, white, and rosé wines made from grapes grown in San Diego County, including from wineries in Escondido, Fallbrook, Julian, Lakeside, Ramona Valley, and The Wineries on Highway 94. They awarded a record number 9 double gold and 23 gold medals. 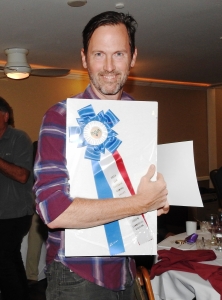 RVVA President Bill Schweitzer said, “The awards are not based on a bell curve. Medals are awarded to the wines that deserve a medal ranking. That says our wines are continuing to get better and better.”

As part of the awards ceremony, keynote speaker Lars Leicht, of Tuscany's Castello Banfi, highlighted key learning experiences from a thirty-year plus process of bringing Italian wine to American wine aficionados accustomed to French wine. He recommended that winemakers persevere to make the wine best suited to their climate and skills. He reminded his audience that “every tradition was once an innovation.” Paraphrasing Shakespeare, he concluded, “To thine own ‘wine’ be true.” 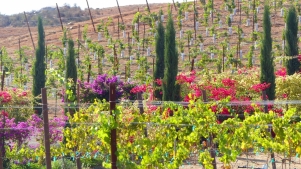 Ron Nowak, Judge Coordinator and Chief Judge, recruited a group of judges for this year's competition. They included representatives from the American Wine Society, sommeliers, wine education, and winemakers. Based on their background, the judges were evenly distributed in three panels for judging. They met and rated submitted wines on June 6th, 2018. Judges included:

Jay Bileti - Regional VP, Arizona; On the Board of Directors as Member Services Director

Lars Leicht, Trade Development Director and 32-year company veteran at Tuscany Banfi Vintners served in a variety of national and international positions. His role today is a hybrid of past responsibilities in key support for the Banfi team.

Since 1998 Lars guides annual trips to the vineyards and wineries of Italy for the Guild of Sommeliers, hosting over 100 sommeliers to date as Italian wine culture sherpa. He was translator and advisor for the movie “SOMM” and made a cameo appearance in the sequel “SOMM II: Into the Bottle.” Lars developed and is “Dean” of Cru Artisan College, an educational initiative touring multiple winemakers in key US cities with insightful seminars and exceptional tastings. He has led cooking and wine classes at Central Market in Texas, PubliX in Florida, and Degustibus Cooking School in New York, in addition to standing annual appointments to lead seminars at Cornell University’s Johnson Graduate School of Business, Columbia University Law School, and the North Miami campus of Johnson and Wales University.

The San Diego County Lum Eisenman Wine Competition, chaired the last two years by Don Bartick, was created and is sponsored by the Ramona Valley Vineyard Association to give individual winemakers constructive feedback on their techniques and results in order to improve winemaking throughout San Diego County. Don is a retired mechanical engineer. He and his wife Arline became interested in growing wine grapes and making wine in 2005. They planted four varietals of grapes and built a small winery within their home property as a hobby. In 2010 they converted their home into a small B&B that provides guests with a winegrower experience on a small scale. Today they are considered amateur winemakers.

Lum Eisenman, was born and raised in Riverside, Calif.  A physicist by profession, he migrated to Del Mar in 1971 with his wife.  From youth he was an amateur winemaker, and became a mentor for San Diego vineyard owners, and the founder of the San Diego Amateur Winemaking Society—and he is always a teacher. He has written dozens of articles and The Home Winemakers Manual is considered an authority by many throughout the United States.

The Ramona Valley Vineyard Association (RVVA) was founded in 2001 “to promote, protect and enhance the Ramona Valley AVA, our wines, vintners, and community.”  The RVVA was largely responsible for creating the Ramona Valley American Viticulture Area (AVA) in 2006 and the sponsoring organization for the effort to create the Boutique Winery Ordinance in 2010. Current President: Bill Schweitzer. For more information, see http://www.ramonavalleyvineyards.com.