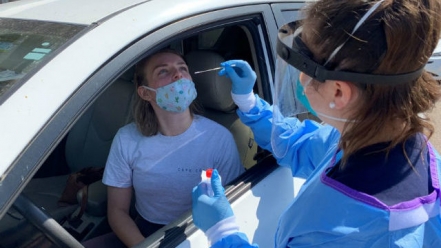 October 7, 2020 (San Diego) - San Diego County reported 161 new cases of coronavirus on Tuesday and remained in the substantial, or red, tier in the latest state ranking.

According to ranking by the California Department of Public Health, the county’s weekly case rate per 100,000 population came in at 6.5, down from 6.7 last week, following adjustment for the volume of testing. Anything higher than 7.0 for two weeks would push the county into the widespread, or purple, tier and lead to closing of indoor venues.

While the latest ranking was good news, officials also reported three more deaths from the pandemic disease. The latest victims were two men and one woman aged from their mid-50s to early 80s. All had underlying medical conditions.

The county received 8,788 test results in the past day, 1.8% of which were positive, and the 14-day rolling average of positive cases ticked down to 2.9%. None of the new cases were associated with the recent outbreak at San Diego State University.

No new community outbreaks were reported, though there have been 20 over the past week.