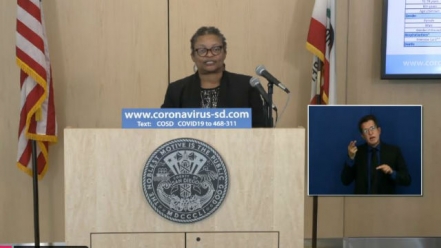 November 4, 2020 (San Diego) - Rising coronavirus cases pushed San Diego County into the “purple” zone on Wednesday, raising the possibility of new restrictions if the case rate does not fall by next week.

The California Department of Public Health listed the county’s daily rate of new cases at 8.7 per 100,000 population and adjusted that down to 7.4 based on a high level of testing. But an adjusted rate of 7.1 or higher is the purple tier.

If the county ranks in the purple tier again next Tuesday, then indoor operations at restaurants, museums, places of worship, breweries and many retail businesses will have to either close entirely, move outdoors, or modify in other ways.

The new ranking—a day late because of the election—came as the county reported 404 new cases and three more deaths. The latest victims were two women and one man aged from their late 50s to late 80s. There were also seven more community outbreaks for a total of 25 over the past week.

Dr. Mark Ghaly, secretary of the state Health and Human Services Agency, said cases have been rising throughout California, and blamed this in part on “pandemic fatigue” that causes people to act less safely.

“Many of us feel exhausted, fatigued or frankly impatient,” he said, warning that cases “can skyrocket quickly.”

Asked specifically about San Diego and Sacramento Counties, Ghaly expressed some optimism that they could remain in the red tier.

“I’m not sure if San Diego and Sacrament will move back,” he said.” We’re certainly working closely with those counties.”

Dr. Wilma Wooten, the San Diego County Public Health Officer, attributed the recent rise in cases to younger adults participating in parties and increasing exposure at workplaces, but noted “it really is across the board.” She urged residents to wear masks, practice social distancing and take all other precautions.

“The state’s assessment that places us in one tier or another…is the result of our individual actions and collective behaviors,” Wooten said at a press briefing.

San Diego County has been in the red tier for months, skirting but ultimately avoiding the purple tier each week until now.

He said San Diego County needs to make a “significant change in trajectory” to avoid another measurement in the purple tier next week.