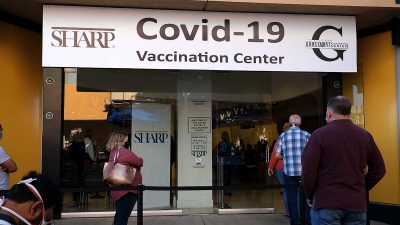 February 25, 2021 (San Diego) - San Diego County health officials announced Wednesday that vaccinations of teachers and other essential workers will begin Saturday because most seniors have received a dose and appointments are opening up.

Supervisor Nathan Fletcher said vaccinations are being expanded up to the next group in Phase 1B, which includes teachers, school staff, childcare workers, emergency services personnel, and employees in food and agriculture.

Fletcher, who spoke at the county’s weekly press briefing, said there are approximately 500,000 people in the next group and cautioned that it will be awhile before appointments are easy to schedule.

“There will not be half a million appointments available on Saturday,” he said. ” So we need folks to be patient.”

Fletcher said the county is keeping 20% of new doses in reserve to vaccinate K-12 teachers and staff. These appointments will be scheduled through school districts.

Anyone else in the next Phase 1B category can make an appointment through the county’s online list of vaccination sites or the state’s MyTurn.ca.gov.

Fletcher said 68% of seniors in the county have received at least one dose, and the county will continue to encourage them to get vaccinated.

He said that as the county opens up vaccinations, Cal Fire teams will be sent into agricultural areas to vaccinate hard to reach groups.

“Even with the interruptions in the last few weeks in the availability and supply of vaccines, we are getting vaccines in arms at a very impressive rate,” Fletcher said.

He expressed optimism that vaccine shipments would pick up later this week, and would soon be supplemented with a new one-shot vaccine from Johnson & Johnson.

sure YOU VOTE to NOT remove newsom.
We will see how he performs, if he can turn it around. Or if voting for recall gives a Republican any reasonable chance of winning, I will not do it. But if Gavin continues to equivocate on Covid-19, and kills more Californians, I will look at the opportunity to get someone more competent and progressive into the governor's chair. We really just have to take a wait and see, let the situation play out.
I have been hard on our Governor. But if our schools open with vaccinated teachers, I am going to give "wine cave" Gavin a second thought. Let's see some results and hope the variants don't flank the vaccines. I also think our county supervisors are doing good work, and so is Cal Fire who has been running rural vaccination clinics.