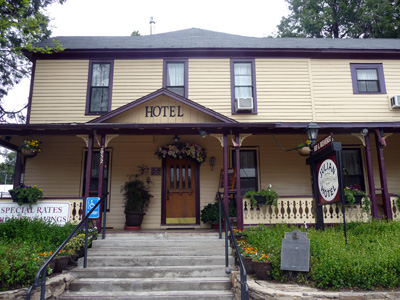 July 21, 2019 (Julian) - Whites who had been slaveholders and blacks who had been slaves contributed to the early history of Julian.  Today, in the colorful mountain town of gold mines, apples and antiques, both groups of people as well as other ethnic groups  are remembered and honored.

One of the earliest African-Americans on the scene was cattleman A.E. “Fred” Coleman, who on his travels in 1869 spotted a glint of gold in a creek that today bears his name.   He started panning, and word of his discovery soon spread.  Soon, a Coleman Mining District was founded with Coleman as its elected recorder.

Figuring that the gold washing down the creek must have come from somewhere upstream, various prospectors went looking for mines.   Drue Bailey, an ex-Confederate soldier, who came here with two brothers and two cousins, on Feb. 20, 1870, discovered quartz gold at a mine he named “Warrior’s Rest.”  Two days later—Washington’s Birthday—three prospectors recorded another deed, for what became known as the “Washington Mine.”  News of the discoveries prompted a full-blown gold rush, resulting in Bailey’s homestead being converted nearly overnight into a mining camp.

Bailey laid out his townsite and named it after one of the cousins who had come with him to California from Georgia: Mike Julian.  Asked why he chose the name “Julian City,” instead of “Bailey City,” Bailey reportedly replied that the former was “a better sounding name” and that Mike “was the handsomest man in the camp and a favorite of the ladies,” according to the Julian Historical Society.

Numerous  mining claims were staked in the Julian area thereafter.  Their names reflected the heritage, local geography and fantasies of the miners:  These included the Golden Chariot Mine, Ready Relief Mine, Blue Hill Mine, Eagle, Redman, High Peak, Shamrock, Warlock, Chieftain, Gold King, Gold Queen, Neptune, Oriflamme, and Ruby, among others.

The most successful mine, however, was the Stonewall, named after the Confederate General Stonewall Jackson.  After it was purchased in 1886 by Robert Waterman, a transplanted Illinois politician, it was said to produce $500 a day in quartz-bearing gold, eventually producing $2 million.

The same year that Waterman purchased that mine, he also was elected lieutenant governor of California, advancing to governor the following year upon the death of Gov. Washington Bartlett.

Permanent structures were needed at the mining camp, and among the earliest were a school house and a jail.   Many of the 19th century buildings gracing today’s Main Street have plaques in front of them, telling of Julian’s multi-ethnic past. 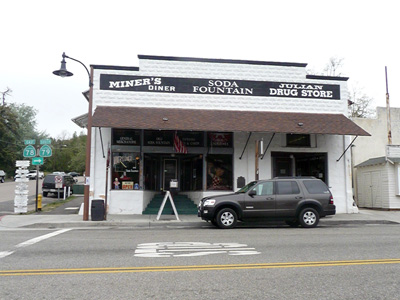 For example, at the northeast corner of Washington & Main Street, where the Julian Drug Store stands today, a plaque placed by the Julian Historical Society tells of some early Jewish settlers:

“Levi-Marks Store, 1886 – This brick building, first in the back country, was built using 100,000 bricks from Ike Levi’s Julian kiln for Adolph Levi, Austrian immigrant, and his partner Joseph Marks, native Mississippian.  Dissolution of the partnership made Marks the sole owner of the new building, except for a lease to Rudy Levi and Jake Noah.  Marks housed his Julian mercantile here until he retired in 1921.  This remaining example of several early Julian brick buildings has housed a valuable community service without interruption for more than 100 years.”

Where the Fajita Grill is located today, another plaque speaks of the area’s Italian heritage:

“De Luca House, 1893. – Frank Antonio DeLuca, an Italian immigrant, naturalized in 1872, of Memphis, Tennessee, and wife Florence, created this small house typical of Julian in 1897 from a studless, rough-plank cabin, built in 1893 by miner C. L. Barnett.  De Luca came here in 1889 at age 42 and became a leading merchant, grub-staker of gold miners, and an astute trader in land.  He, other businessmen and farmers, organized the first Apple Days celebration Oct. 9, 1909.  Childless Florence retired to San Diego when Frank died in 1925 at age 77. She died there in 1945, age 90.”

“Hotel Robinson, 1897 –Built for Albert Robinson, ex-Missouri slave, and wife Margaret on the site of their restaurant bakery. The sole surviving Julian mining era hotel became famous for its hospitality with miners, promoters, politicians, sightseers, salesmen …  other visitors, some famous, made the hotel their base.  Maggie’s excellent meals, Sunday chicken dinner, nice rooms at reasonable rates were unequalled. Albert died in 1915, Margaret carried on alone until 1921 when she sold the property for $1500, and it was renamed the Julian Hotel.” 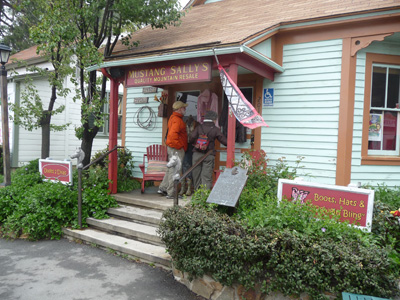 White Protestants made up the bulk of the population.  Among the plaques telling of these pioneers is one in front of the clothing store today known as Mustang Sally’s:

“Hoskings Rental, 1903 –“A mining and ranching town, many people in Julian could not afford to buy homes on $3 per 10-hour day.   This home, typical of many here, provided 564 square feet, four rooms, kerosene lamp, wood stove, hand-dug well and privy from $6 to $12 per month.  It was built with salvaged lumber from Cuyamaca City, the abandoned town by the depleted Stonewall Gold Mine.  Landlord George Hoskings, orphaned child, of early Julian innkeepers parlayed an inheritance from bachelor Thomas Daly into vast land holdings including 56 town lots.”

The mines had a good 40-year run before they were played out, although the Eagle and High Peak Mines today have been combined into a historic tourist attraction.   One also can visit the Pioneer Museum and the Town Hall to get a sense of the area’s early history.

During the mining boom, a man with a presidential sounding name – James Madison– who loved horses and fruit, settled in Julian and promptly imported apples to the area, reportedly from Central California.

In his city history, Julian City and Cuyamaca Country, author Charles LeMenager reports that Madison was garnering attention in 1880 for his apple and wheat crops, and that a decade later the apple growers of Julian were winning prize after prize at the first San Diego County District Fair, held in 1890 in Escondido.

At that fair, the judge for the best-tasting apples was Wyatt Earp, the gunslinging, gambling entrepreneur who had moved from Tombstone, Arizona, after the famous shootout at the Okay Corral to San Diego, where he maintained businesses, not all of them respectable, in San Diego’s Gaslamp Quarter.

Three years later apples from Julian were winning ribbons at the Chicago World’s Fair, and went on to take honors at major world fairs in St. Louis and San Francisco.   Numerous varieties of apples were produced in Julian and environs including Baldwins, Bellflowers, Bush’s Seedlings, Duchess of Oldenburg, and Greenins.  Later other varieties were added to the menu, among them Golden Delicious, Jonathan, Red Delicious, Rome Beauty and Winesap.

Julian residents recognized that their fortunes were transferring from the mines below ground to the trees above ground and so created Julian Apple Day on October 9, 1909.   Observed sporadically at first, the special day eventually stretched and stretched, so that today the entire month of October is known as Apple Days.

Two of the best known bakeries in Julian are the Julian Pie Company and Mom’s Pies, the latter of which boasts a mouth-watering cherry-apple crumb cake that this author and some recent visitors from Kentucky agreed were delicious – even though one of us ate it cold, others consumed it warm, some devoured it plain, and others savored it with ice cream.

In Julian, one can shop in buildings that are older than the many antiques that are for sale.  Whether one seeks old books, nostalgic dolls, crockery, household items, backyard items, toys or knickknacks, Julian seems to have a surplus of them.  Even people who are not collectors sometimes get caught up in the fun, buying presents for people who enjoy tangible reminders of America’s multi-cultural past.