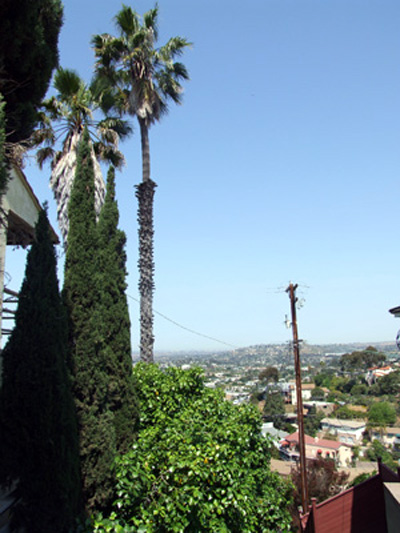 April 30, 2019 (La Mesa) - Sherman C. Grable, a Methodist from Ohio who evidently knew his Hebrew Scriptures quite well, purchased hundreds of acres of land here in 1906 and decided thereafter to offer to potential settlers a view that the Prophet Moses might envy.

Wonderful view lots were on a hill that rose 300 feet above the table land that was to become known as La Mesa, but which originally was named “Allison Springs,” after settler Robert Allison and later ”La Mesa Springs.”

Somewhat grandiloquently, Grable named this hill “Mount Nebo” after the summit up which Moses trudged at God’s command to look out upon Canaan and then to be gathered up to his people. Grable’s hill would have needed to grow nearly another half mile in height to match the size of the famed Biblical mountain (2,680 feet) on the Israel-Jordan border, but nevertheless Grable saw from it a panorama that he apparently considered as filled with potential as the Promised Land.

In fact, he could survey from his mountain a nearby area known today as Collier Park (honoring an earlier pioneer, D.C. Collier) and see the spring that was the namesake for Allison Springs/La Mesa Springs as well as the reason why the San Diego and Cuyamaca Railroad already had located a station below his mountain.

In 1908, two years after purchasing and subdividing his mountain, Grable and partner C.C. Park published the first edition of La Mesa Scout as a way to draw attention to the lots which he sold for $200 if they had a view and $150 if they were on level ground.

“As we leave the Spring Valley station on the Cuyamaca railroad, our attention and admiration are attracted by the wonderful scenery…” wrote the Scout’s first editor, Wiley A. Magruder. “ At last we stop, and alighting from the train, we are conducted to a carriage bound for the summit of that majestic sentinel, Mount Nebo.”

Running short of adjectives, Magruder challenged his readers: “Our own vocabulary was exhausted long ago in the vain searching for an expression that will carry what we mean. To the person or persons who will send in such an expression as will convey something of the feeling one has when he stands upon the summit of Mount Nebo in Lookout Park, we will give a free year’s subscription to this paper.”

Anna M. Gilbert, who in 1924 authored the local history, La Mesa Yesterday and Today, was many years too late for Magruder’s contest, but nevertheless she waxed lyrically: “All around La Mesa are beautiful views and beautiful country but none this side of Grossmont and Helix can surpass that seen from the top of Mt. Nebo. From there ridges of blue-clad mountains can be seen to the north, south and east, while to the west in Point Loma and the bay. At night the lights of San Diego are an added beauty when looking westward.”

Gilbert also recounted a train ride taken from their offices in downtown San Diego to their homes in La Mesa by two town pioneers, Colonel James J. Randlett, a former Civil War scout, and Dr. Parks. They were sitting in the caboose of the mid-day train when “Col Randlett looked out toward Mt. Nebo and seeing the furrows marking off the lots, and the streets plowed, he said: ‘What in the world is Grable doing now?’ Dr. Parks replied ‘Grable expects a street car line to be running to the top of Mt. Nebo in a few years.’ Col. Randall then asked ‘Do you think this place will ever amount to anything?’ Dr. Parks answered that was brought him here and that his belief in La Mesa was unbounded.”

Today, the hill is covered with houses and vegetation and the downtown area bustles with businesses—obscuring views in both directions. Lookout Avenue now is called La Mesa Boulevard. Date Avenue retains its name, but Third Avenue and Railroad Avenue respectively have added to the biblically reminiscent flavor by becoming Acacia and Nebo Avenue.

“Mt. Nebo,” “Acacia,” “Date.”  One might get the impression that La Mesa residents wanted their town to be considered a biblical paradise. However, promoters of the area, including Grable himself, also chose other names to invoke images of gracious living. Promotional material for Grable’s hillside development suggested that La Mesa was to San Diego what the tiny suburb of Pasadena was to Los Angeles. The comparison so resonated that one of the important streets on Mount Nebo indeed is Pasadena Avenue, not the first time a real estate developer has mixed a metaphor. Developers of nearby property were equally enamored of the Britain of legend, bestowing such street names as Windsor and Canterbury in a section of Mount Nebo dubbed Windsor Hills.

In addition to its views, another distinguishing characteristic of the Mount Nebo neighborhood are the “secret stairs” that rise between home lots from lower streets to Summit Drive. Driving around the neighborhood recently, I saw a shirtless athlete huffing up the 245 steps to Summit Drive from Windsor and Canterbury Drives. As he caught his breath at the top of the stairs, I asked how good a workout the run up had been. “Brutal!” he gasped.

Grable had his large 2 ½ story home, which he named “Hillcrest,” built at the end of Date Avenue. Another picturesque neighborhood spot is Prospect Way, where La Mesans held Easter Sunrise Services in 1915 before the area’s landmark concrete cross and amphitheatre was built on Mount Helix.